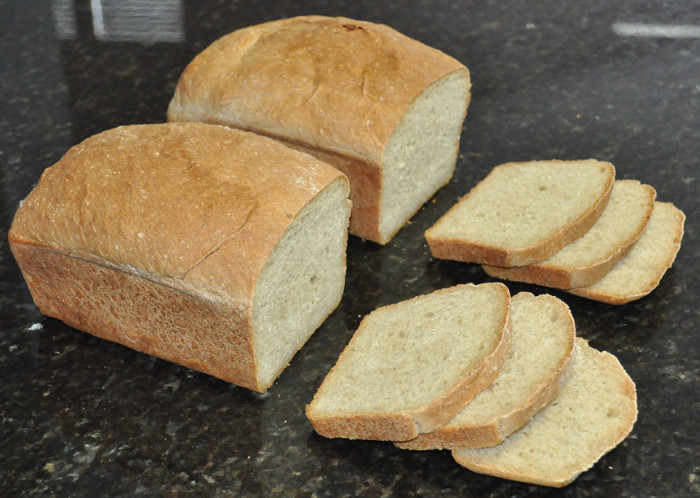 When you are testing the effect of variables it’s a good idea to only change one thing at a time. That way you can have an idea what the difference in your results was caused by. Here I changed two things. I should have known better, but I was out of the Gold Medal Brand bread flour that I used in parts 1 and 2 of the Oatmeal Bread posts, so I used flour from a 25 pound bag of Bakers & Chefs Bread Flour I bought at Sam’s Club. I also used my stand mixer to mix and knead the dough since I was making two loaves at once and the bread machine only makes enough dough in a batch for one loaf. 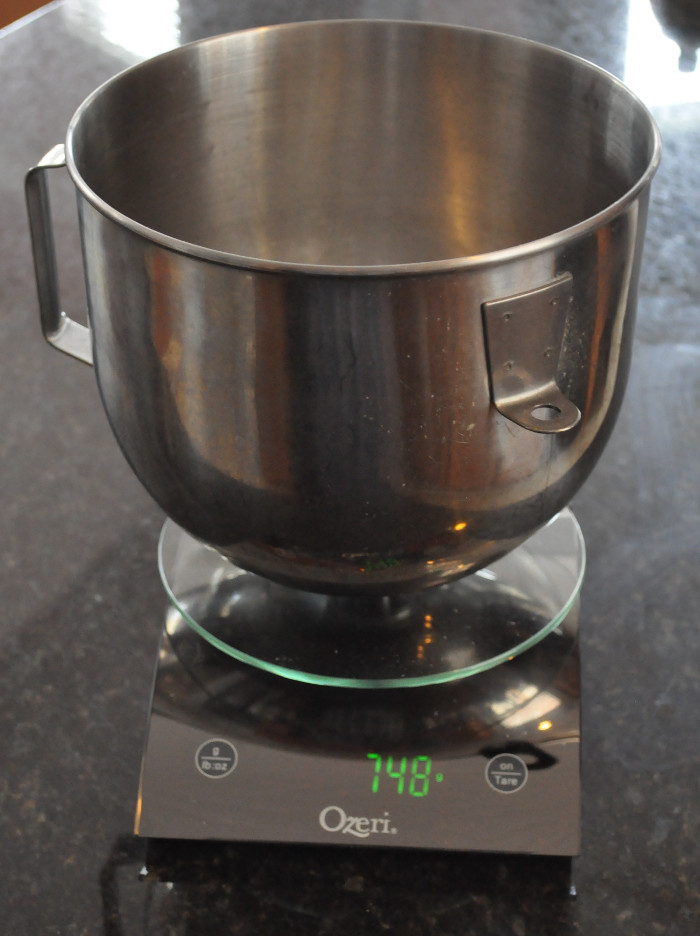 The ingredients are all weighed right into the mixing bowl. The scale weighs up to 18 pounds, but I use grams for as the number of grams seems less complicated to me than pounds and ounces. The scale shows 748 grams in the photo, but it’s easy to measure the ingredients since pushing the tare button the reading goes to 0 and you can add until it shows how many grams you need. I used a smaller 300 gram capacity scale for the sugar, salt, and yeast as it weighs with 0.1 gram precision and the big scale only reads to the gram. A gram off in 100 grams is not a big deal, but a gram off in 5 is a 20% error. I have used the big scale for all the ingredients, but have decided to use the smaller scale in the interests of repeatability between batches. 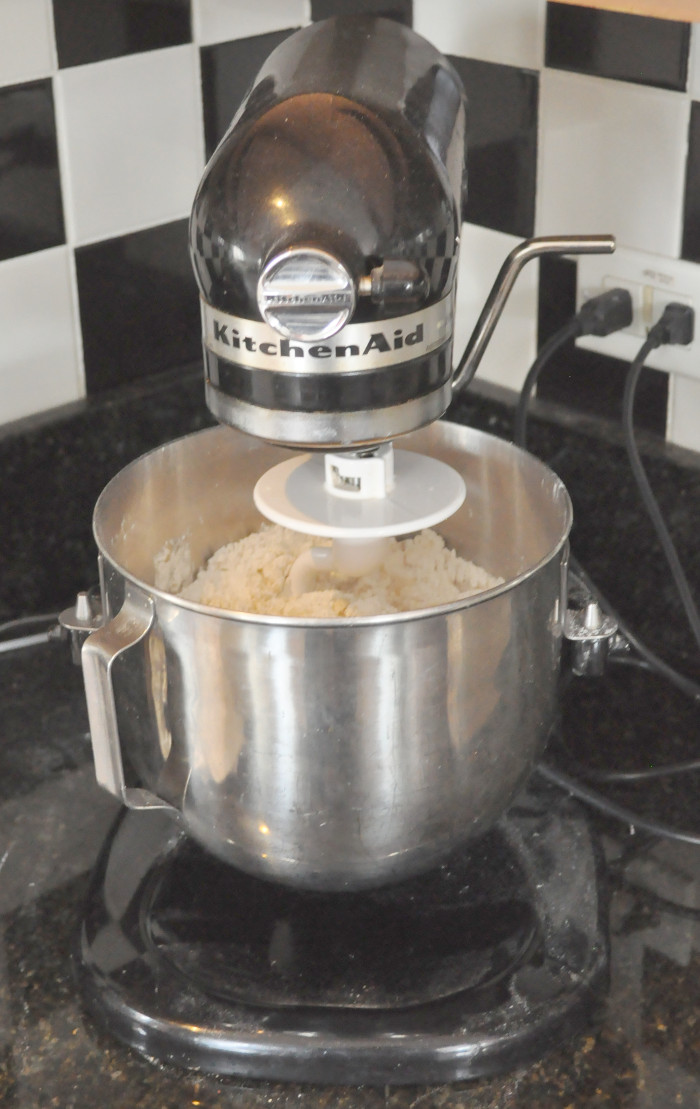 When the ingredients are all in the bowl there is a lot of dry flour, so I mixed things by hand to cut down on flying dust when I started up the mixer. It was pretty much all loose in the bowl when I started the mixer and I did get a bit of flour splashing up. 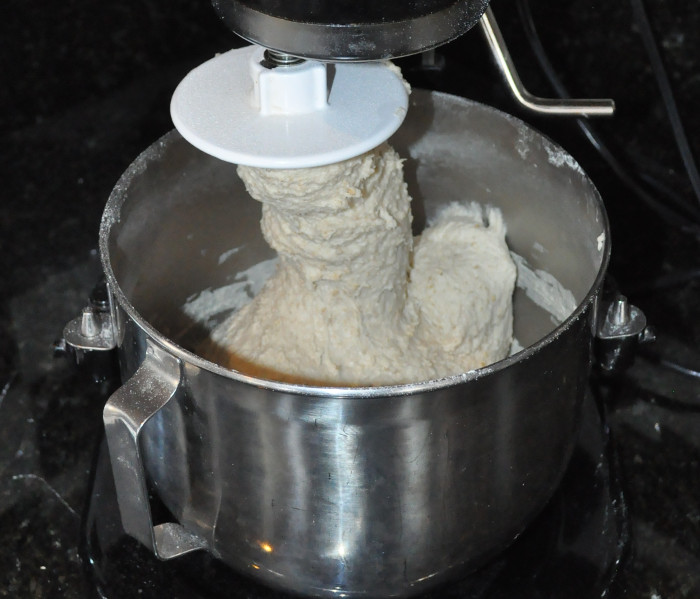 After 6 or 7 minutes on low with the bread hook the gluten developed and the dough was in a ball hanging clinging to the hook. 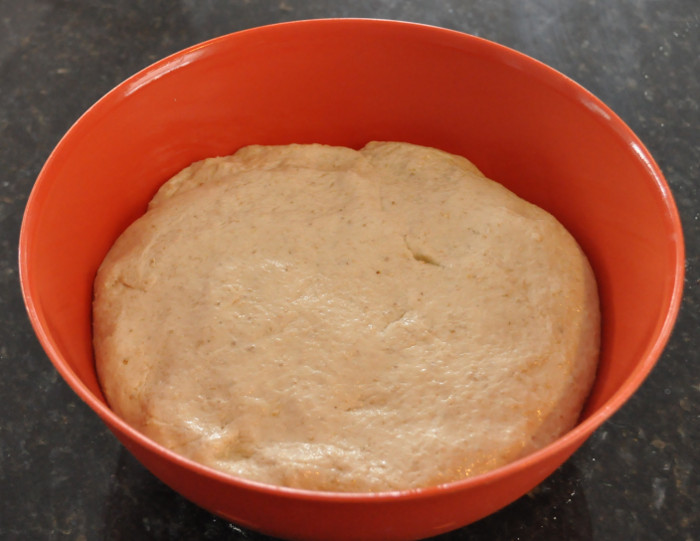 The dough went into an oiled bowl for the first rise. 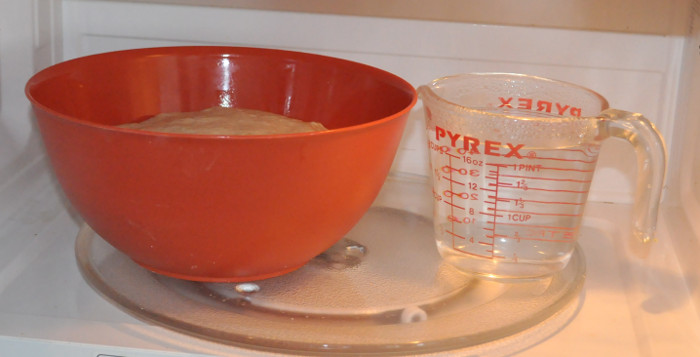 The bowl in the microwave with the boiling water for humidity and some warmth at the start of the bulk fermentation (first rise.)

About an hour and 20 minutes later the dough has about doubled. 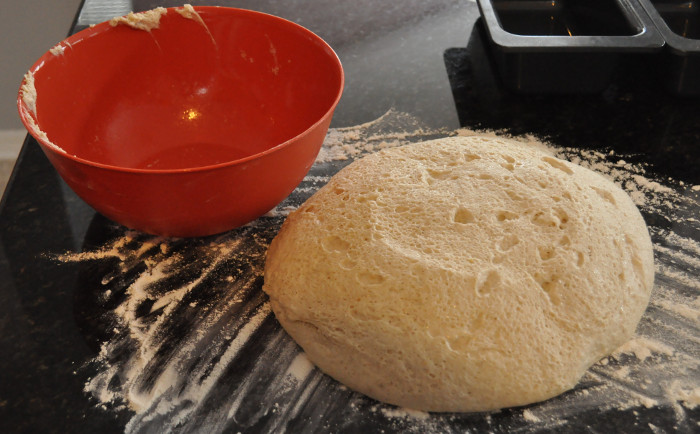 The dough dumped out onto the lightly floured counter. It’s about to be punched down and formed into two separate loaves.

The two loaves each weighed a few grams over a kilo. Here they are at the beginning of the proof rise.

After about 45 minutes proofing the dough had risen above the sides of the loaf pans.

The two loaves were not going to be baked for the same times. The loaf in the oven for 40 minutes had a small slash cut into it before it went in the oven so that it would be possible to tell them apart. 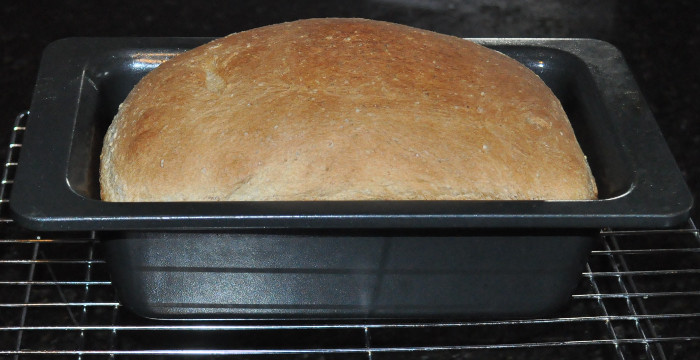 The 40 minute loaf in the pan fresh out of the oven. The slash marking it is visible in the top crust near the left end. 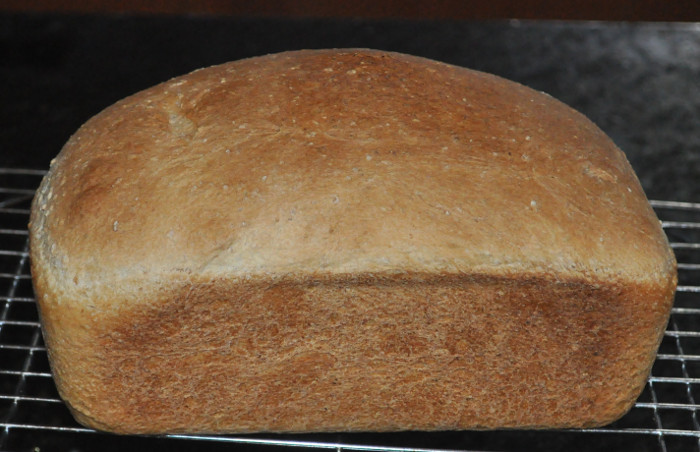 The 40 minute loaf out of the pan and cooling.

The 45 minute loaf out of the oven and still in the pan next to the 40 minute loaf. 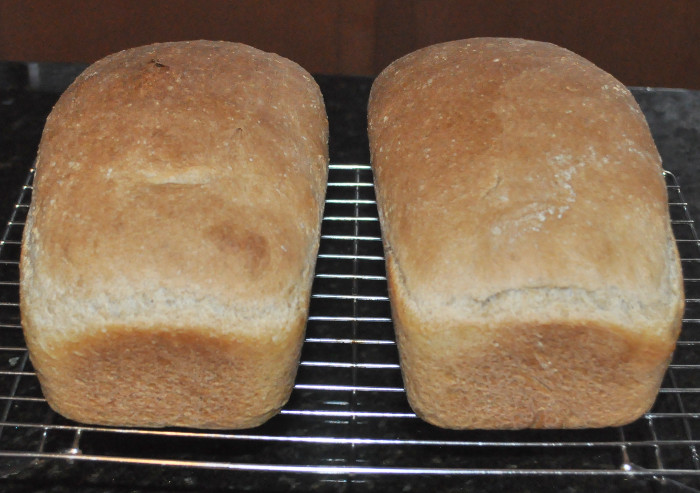 The two loaves, both out of the pan, cooling on the rack. The 40 minute loaf is again on the left, and the slash marking it is visible near the center of the top crust.

Both loaves were good eating, and actually it was hard to tell the slices from the two loaves apart. I was a bit disappointed in them though, the texture was not as even as the previous few loaves. I suspect that it was because of the bulk fermentation step. I’m not sure that I waited long enough for the dough to double in size. But, it might have been the different flour. The next step is to make a loaf with dough from the bread machine and the Bakers and Chefs flour. That will hopefully answer the question about what caused the less even texture of this batch.

I will use 45 minutes at 350 F for the batch to check on which change was responsible for the different result.