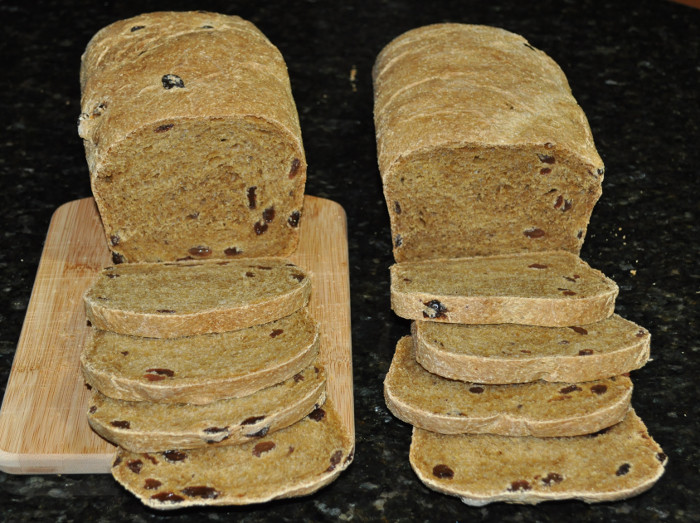 This is the Cornmeal Molasses Bread from part 4 with a couple changes to correct problems. It is scaled up to make 2 kilos of dough rather than only about 1.5. The 2 kilos will fill two 9 by 5 inch loaf pans. The raisins were mixed in with the ingredients to get better distribution in the loaves, and their weight was not counted when scaling to get 2 kilos.

I hadn’t considered it before, but from the photo above it’s apparent that white loaf pan is not only a 9 by 5 inch pan, but its shape is not the same as the darker ones. The loaf on the right, from the white pan, is a bit wider and shorter than the one on the left. From this I was reminded that if I want the shape of loaves to match I need to be sure the pans I bake them in match. 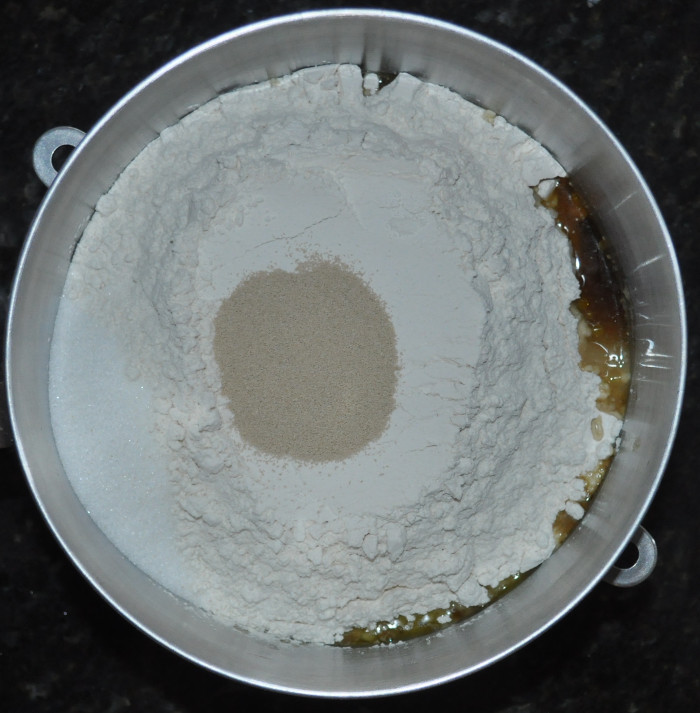 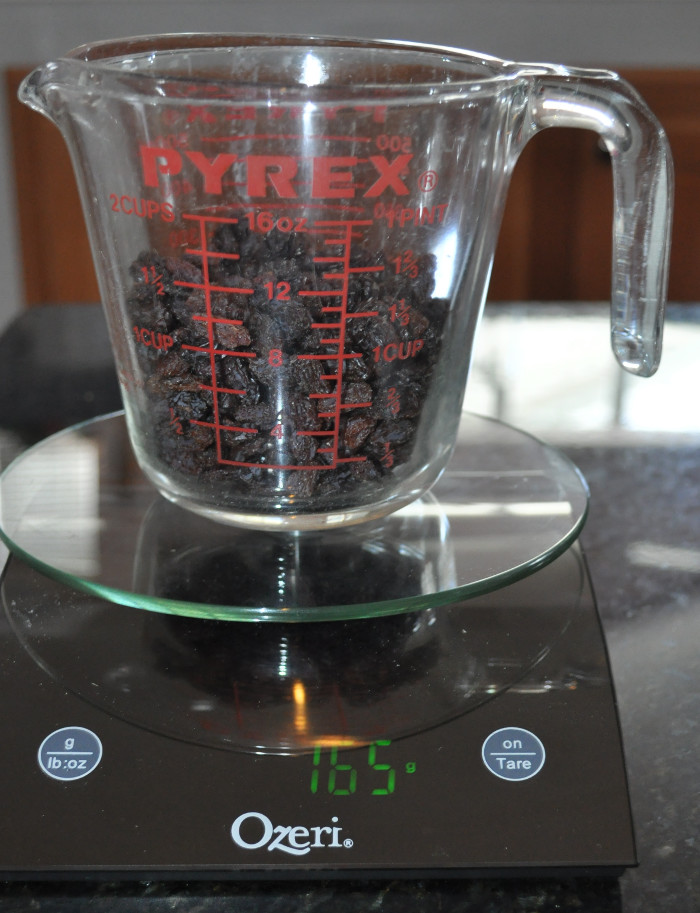 The raisins are shown on the scale above, next the the rest of the ingredients in the mixing bowl. The scale shows the weight, 165 grams, of the raisins before I soaked them in warm water to soften them up. After soaking they weighed 181 grams, so they had picked up 16 grams of water that are not shown in the formula below. The volume shown in the measuring cup is not a good indication of how many there were. I put the raisins in dry and again after soaking. The volume the second time was less.

Here are the ingredients, with the raisins listed at their weight before I soaked them so the extra 16 grams of water aren’t in the list. 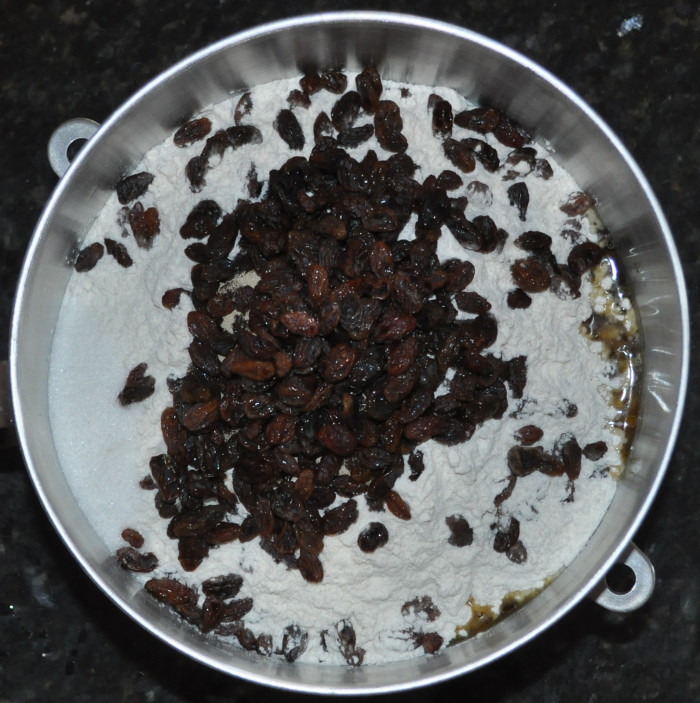 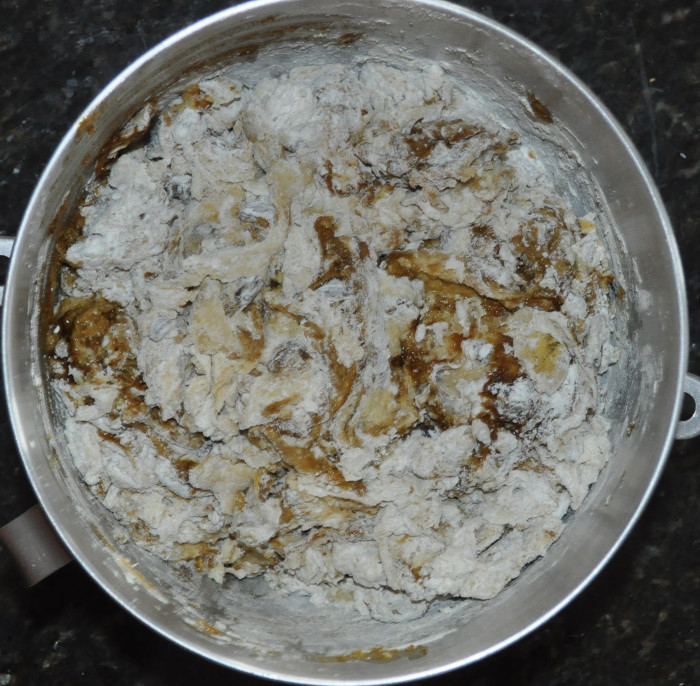 The raisins went into the bowl last, as shown above. I made sure that they were all separated from each other first as they were stuck together in clumps in the package. Then I mixed them in by hand. Putting it all into the mixer before hand mixing to get things moistened sends flour flying.

After mixing to get things moistened the electric bread hook was used for 10 minutes. This was about the maximum load for the the mixer. It was working hard and the dough would have climbed the hook right out of the pan without the disk at the top. 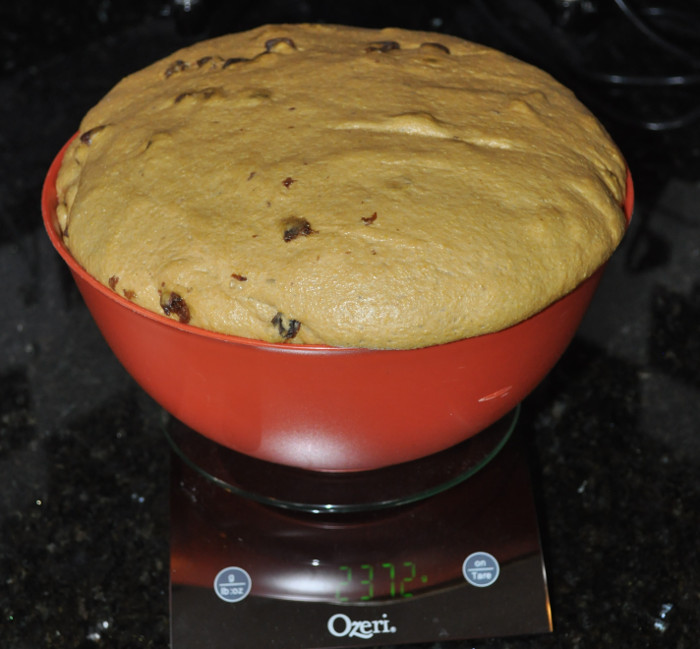 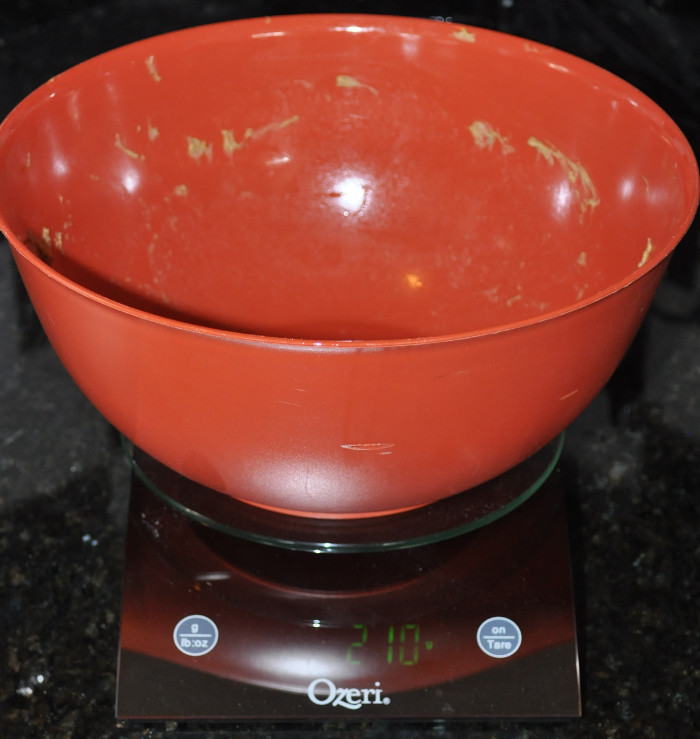 After the rise the weight in the bowl was 2372 grams, and the bowl was 210 grams when the dough had been dumped out. That let me know that I had 2162 grams of dough, so each loaf would get 1081 grams in an even split. 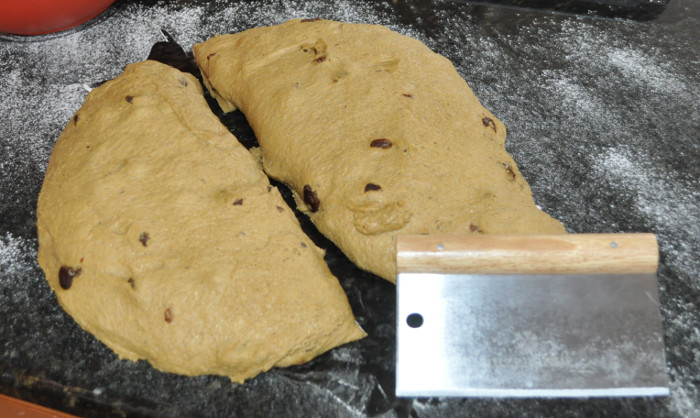 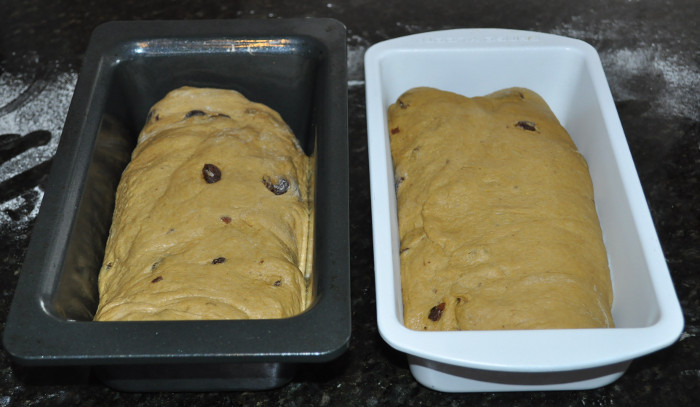 I used the bench scraper to divide the dough. After a little bit of adjusting I had 1075 grams in the white pan and 1082 grams in the dark pan. I didn’t worry about the missing 5 grams. The dough was a bit more sticky than in Cornmeal Molasses Bread – part 4. I suspect that the extra water clinging to the raisins after I soaked them was the reason. In the future I will try using raisins without soaking them to see if they are plump and juicy in the baked bread or if soaking is required.

The proofing took 30 minutes for the dough to double. 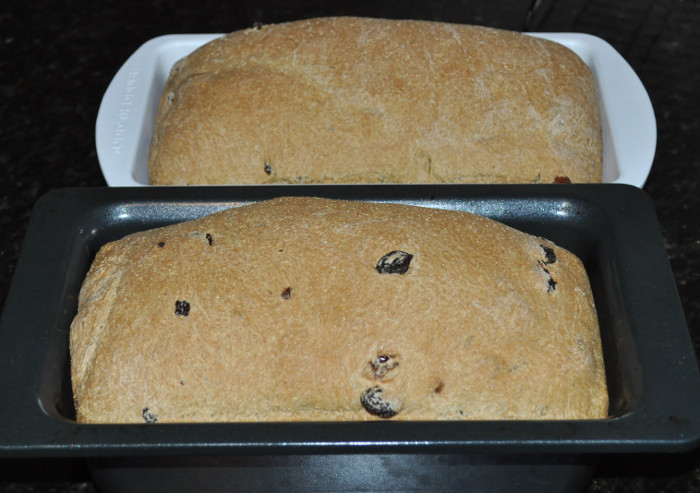 After baking 60 minutes at 300 F the loaves looked good in the pans. There was not very much spring from the oven so the loaves were about the same size as before they were baked. 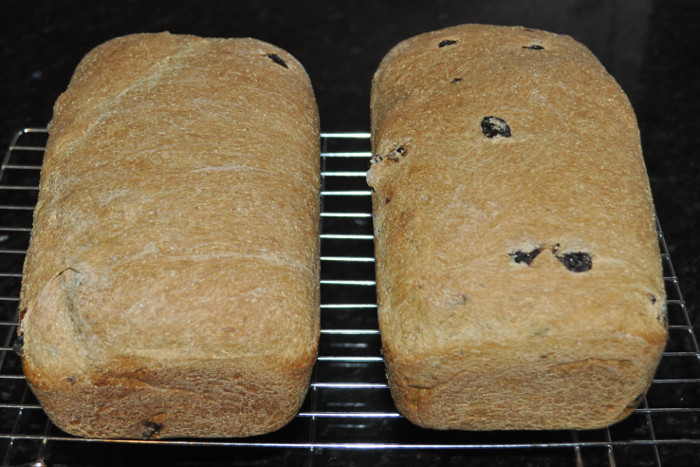 The loaves looked good on the cooling rack. They were obviously raisin bread as some raisins stuck out of the crust. 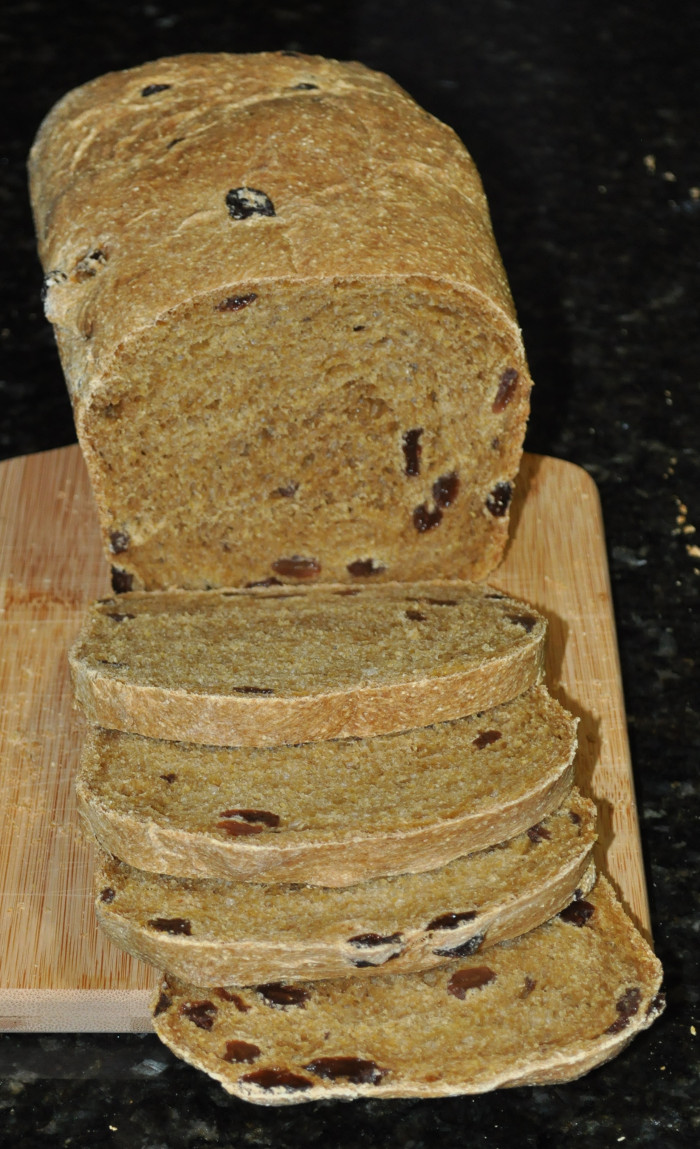 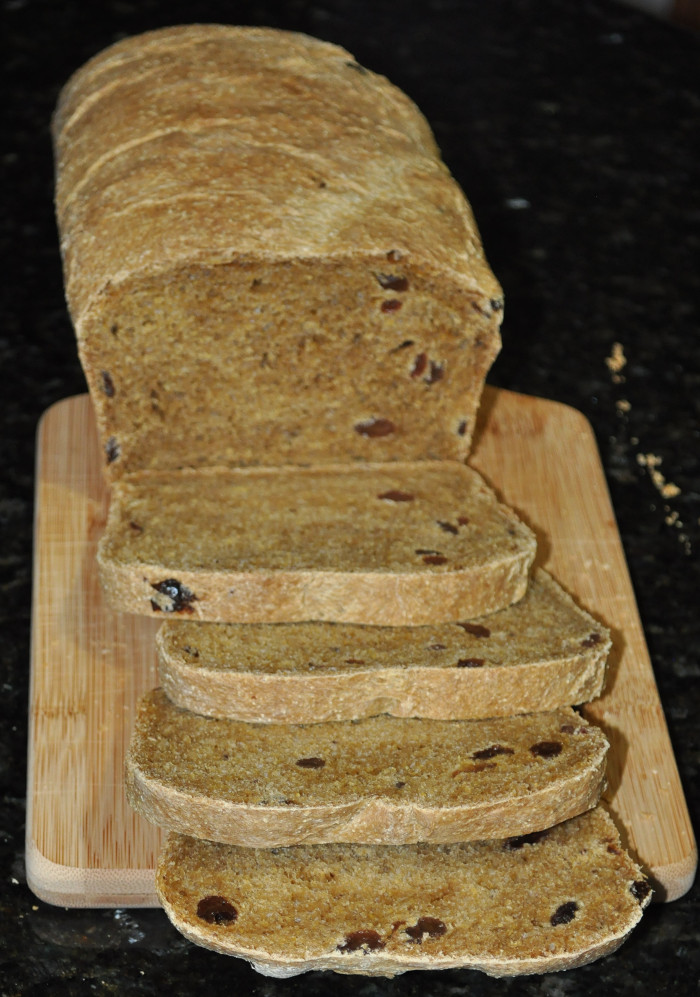 The bread sliced well. The different shape of the two pans is apparent in these images. The white pan’s loaf is on the right and is wider and shorter than the dark pan’s loaf. 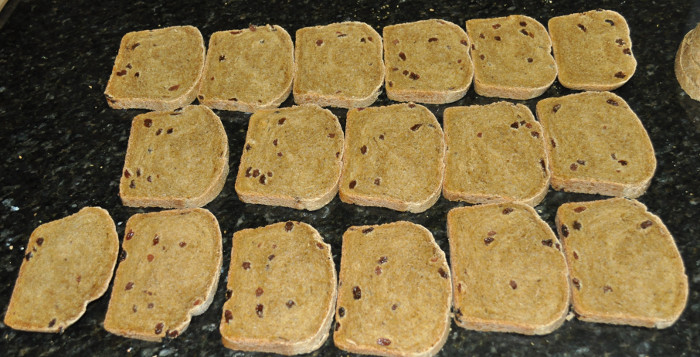 These last two pictures show all the slices from both loaves. I’ve included them to show the raisins in the slices. They are much better distributed than in the previous attempt at raising bread, but not really evenly. There are also not enough of them. Next time will need about double the raisins per 9 by 5 loaf.

How Much Weight is Lost in Baking?