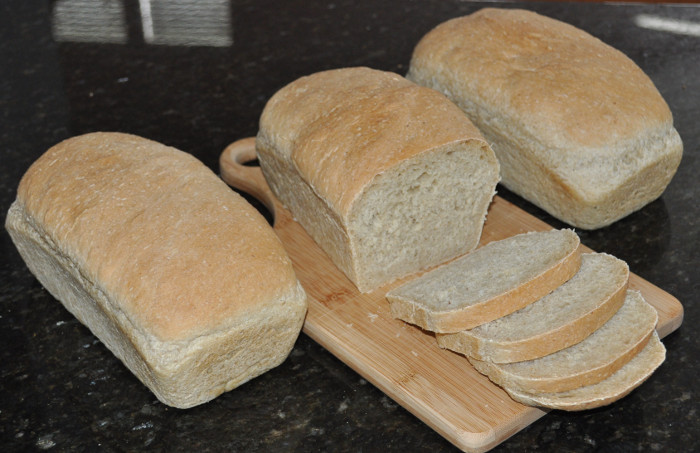 Now that I have three identical pans I can make three loaves that match in one batch. These are oatmeal from the same formula that I have used in earlier oatmeal posts. 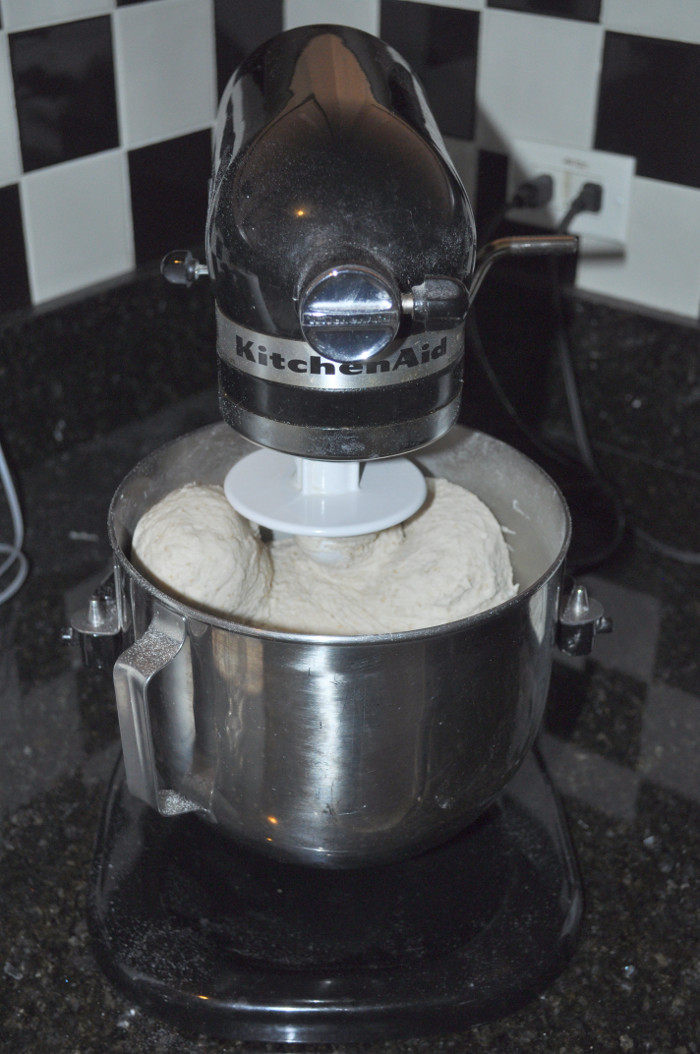 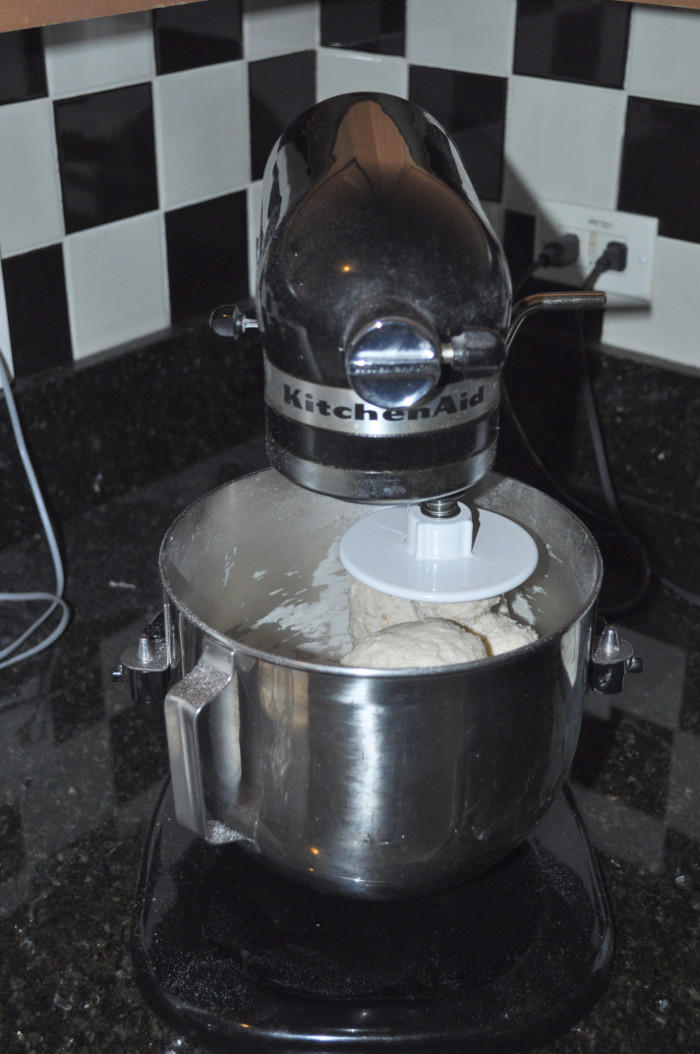 My shiny new pans are shown below: 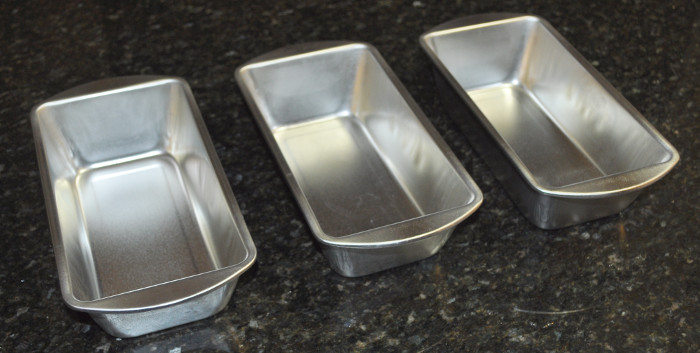 I was at Walmart doing my weekly grocery shopping and walked past the pans. Some shiny bread pans caught my eye. Then I saw the price: 88 cents. I looked closer, they were 4.4 inches wide, 8.4 inches long, and 2.5 inches high. And they were 88 cents. I bought three. They are Mainstay™ brand, made in the USA, and have a three year warranty. (The warranty is pretty useless to me though. You need to return them with a letter of explanation by insured parcel post with $2.00 per piece to cover shipping and handling. I could buy at least 2 more for what one “free” replacement would cost.) The upc for these pans is 7286700162. I am pleased with them and expect to make many loaves in them. 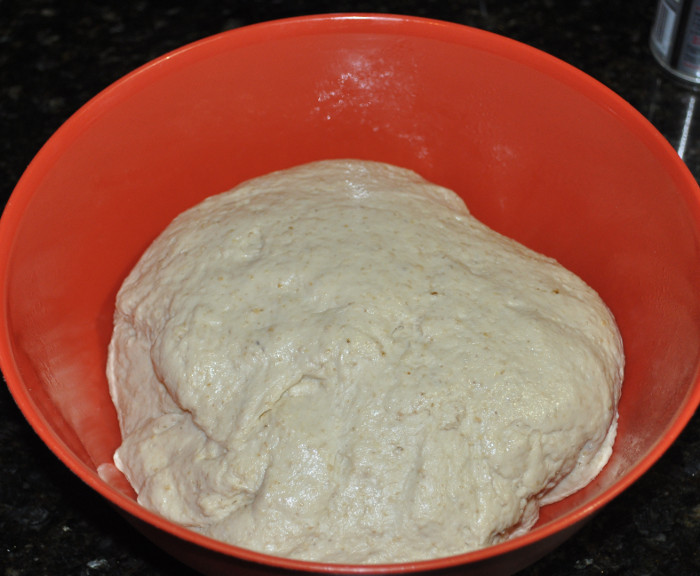 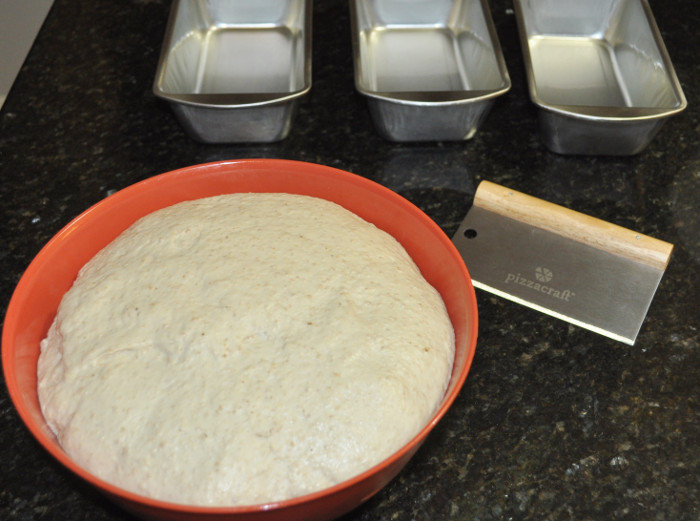 The dough went into a lightly oiled bowl for the bulk ferment (first rise.) The light coating of spray oil makes it easy to get the dough of the bowl after it’s doubled in size. The right photo shows it ready to be divided and formed into loaves.

Here are the 3 loaves in the pans ready to be proofed. They weighed 660, 665, and 667 grams when they went into the pans. This totals 1992 grams. The missing 36 grams from the total 2028 grams of ingredients were lost on the bowl and bread hook. On the right the pans are in the microwave with the cup of boiling water to proof. The microwave is never turned on when proofing, it’s just a convenient chamber to hold the heat and humidity from the water.

After 45 minutes proofing the loaves had doubled and were ready to go into the oven. The proofed loaves are on the left here, and the baked loaves on the right. There was some spring from the heat of the oven as shown by the extra height out of the pans for the baked loaves.

Since these loaves are smaller than the loaves I baked for and hour at 300 F I decided to check them after 3/4 hour or so. After 47 minutes in the 300 F oven I pulled out one of the loaves and checked the internal temperature. It was 200 F, so the loaf was done and I took the other two out. They were not browned very much, but they were done. Maybe they could be left in a bit longer to get a little more browning. 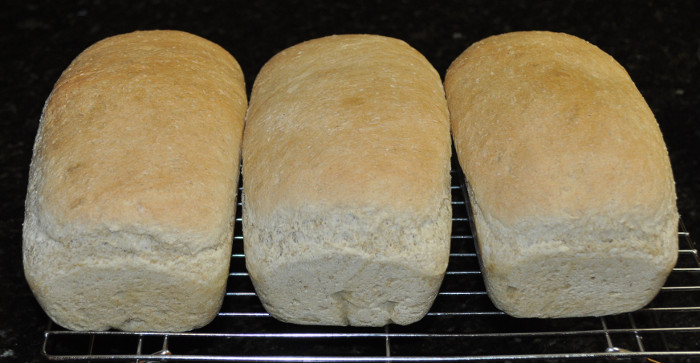 The loaves looked good on the cooling rack. Once they were cooled to room temperature I checked their weights again. They weighed 603, 609, and 609 grams.

From 2028 grams of ingredients the end result was 1821 grams of bread. This loss is 207 grams, or about 10.2% of the initial ingredients. The weight going into the oven was 1992 grams, a loss of 36 grams or about 1.8%. This was mostly on the bread hook after kneading and stuck to the sides of bowls. It could be cut down by adding the bits stuck here and there back into the whole, but is never going totally away. The 171 gram loss in baking is probably mostly water and amounts to about 8.6%. It is probably an inevitable result of baking. 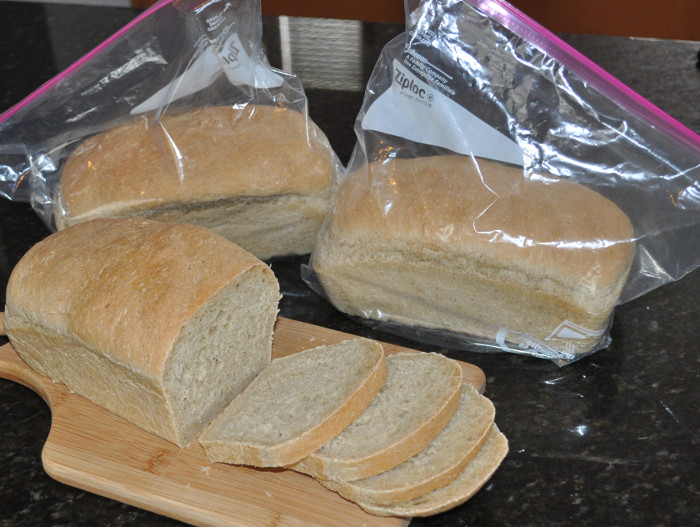 This final photo shows things that I really like about these new pans. The loaf fits in a gallon Ziploc® bag nicely. To get a loaf from a 9 by 5 pan into one it needed to be sliced first. The total length of the loaves is 25 inches, which means more slices than from the two bigger loaves. Each slice may not be as big, but there are more of them. The smaller loaf is easier to slice. With its smaller area the loaf doesn’t move as much when you are slicing so thinner and evener slices are possible.

All in all, I am very happy with these pans. With reasonable care I believe they should last for many years and hundreds of loaves.