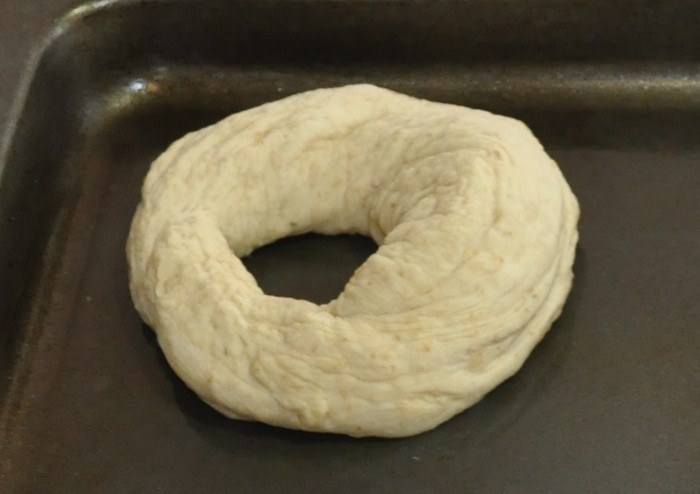 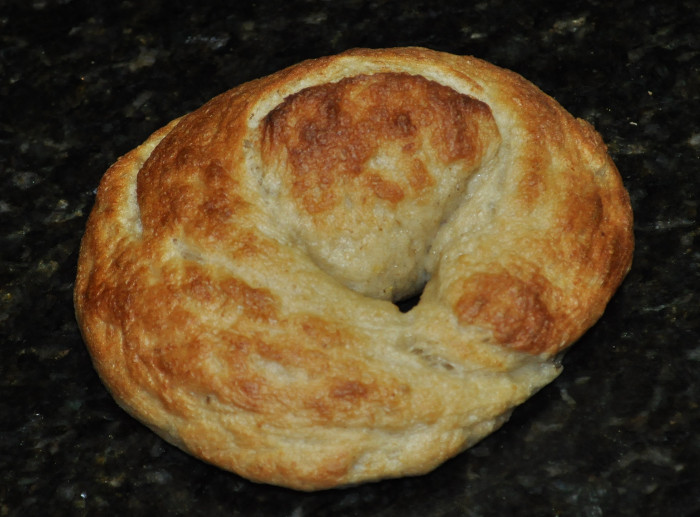 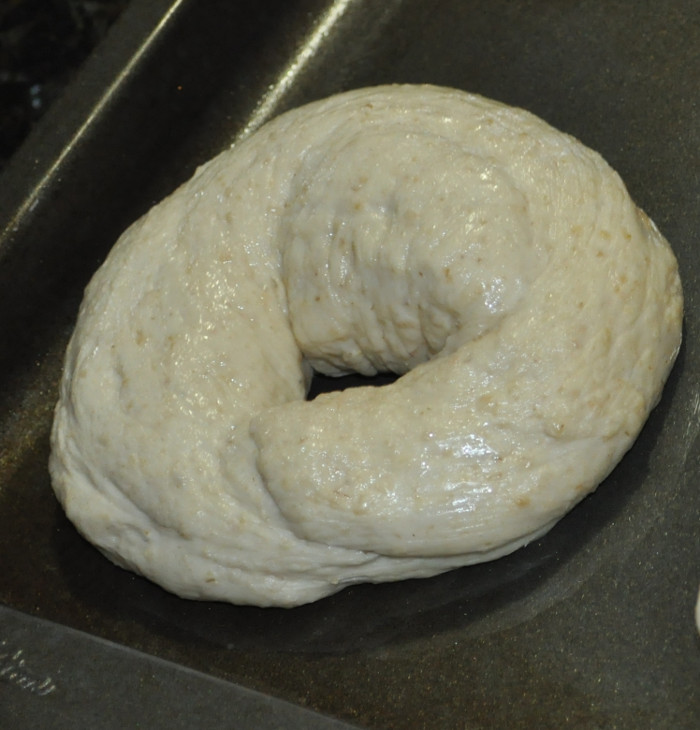 It may take some imagination to recognize that these are Bagels. But they tasted great and were chewy like a bagel should be, so I am counting them a success.

I had read that you needed to make a big hole in the middle. After having made a batch I now am a true believer in the big hole. The pictures above show one bagel. On the left is the way that I formed it. Its got a pretty big hole, although it has already shrunk a little as the dough relaxed when I put it down. On the right it’s proofed and the hole has shrunk. Then I boiled it and put it in the oven to bake. The result is a tiny hole in the finished Bagel, shown in the center.

A second lesson from these is that even when bread may not turn out a total success technically it can still be really good eating. These Bagels, although not very pretty, were much better than I expected them to be. I’m looking forward to making prettier Bagels as I gain experience. 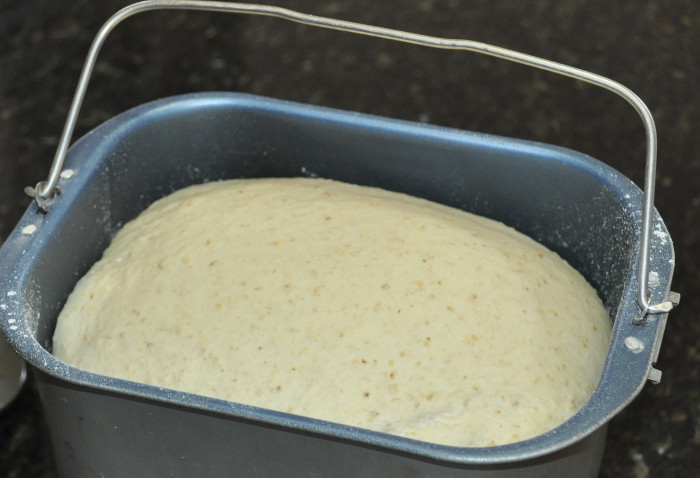 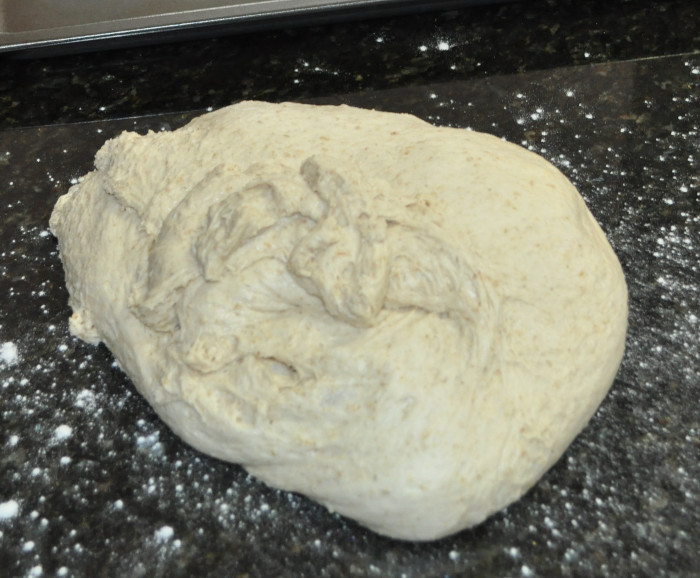 Oatmeal Bagels are not something I had ever heard of, but I have worked out a recipe that works well in the dough cycle of the bread machine. It’s the formula of Oatmeal Bread – part 5:

This makes just about a kilogram (2.2 pounds) of dough, just the right amount for 8 Bagels weighing about 4 1/4 ounces each. The pictures above show the dough ready to come out of the bread machine and then dumped on the counter.

Dividing the dough into 8 more or less equal parts was straightforward. I rolled the dough out in a log. Then with the bench scraper I divided the log in the middle. Then I did the same with the two pieces, and again with the four pieces. The pieces were pretty even, but since I’d never done it before I used the scale and made some final adjustments. Next time I probably won’t bother with the adjustments.

There are two classic ways to shape Bagels. The picture above shows the four steps in one of the ways. From left to right: The piece of dough as divided into a Bagel size lump. Formed into a ball shape, a boule in bread speak. Flattened out to be Bagel thick. Finally, the Bagel shape after the hole has been poked through the flattened shape and the dough stretched out enough that the hole will remain after proofing, boiling, and baking.

The second classic way to shape a Bagel involves rolling the dough between the hands to form a rope 8 or 9 inches long. Then the rope is wrapped around the palm and back of the hand to form a ring when the two ends are pinched together.

Both of these methods sound simple. I can testify that even though they sound simple they are like many other skills. When you read about it or when you watch someone who is good at it it’s simple. When you try to do it yourself you realize that it takes practice to do well.

Here are the first six bagels I shaped. The two on the left are done by the rope method. The other four were done by poking a hole through the middle. Looking at them you can tell I need a lot of practice. They are uneven and lumpy. 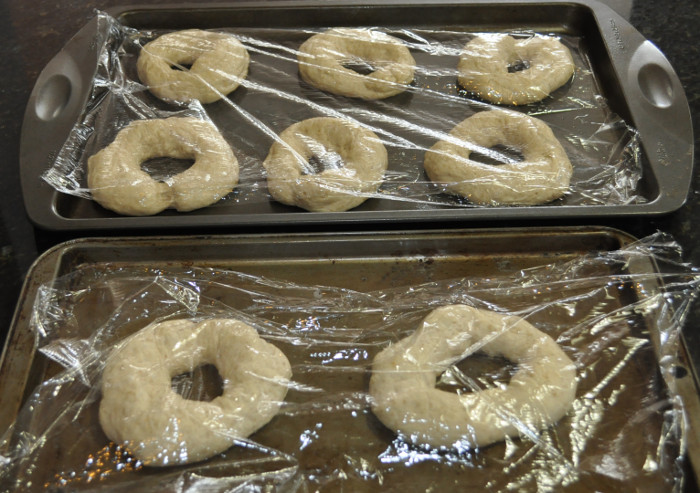 Here are the Bagels proofing on the counter, covered with plastic wrap. The pans they are on are lightly coated with spray oil. The two in front are under plastic wrap that I sprayed so it wouldn’t stick. The six in back I sprayed the Bagels lightly to keep the plastic from sticking. Both ways worked fine, but spraying the plastic wrap was a lot more aggravation. 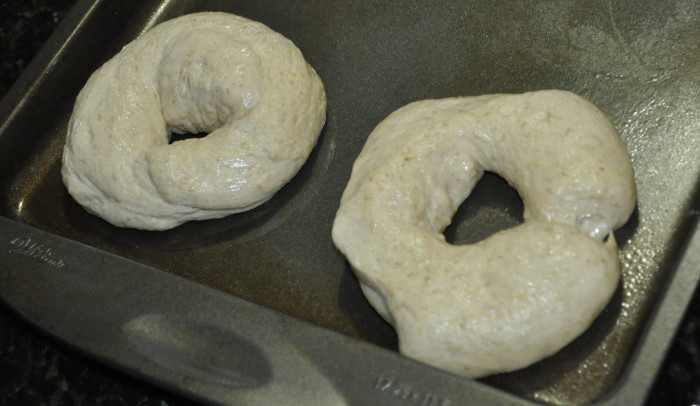 These two proofed Bagels are the two on the left in the picture of the six shaped bagels above. It is obvious how much the hole in the Bagel closes up between the forming and the finished product. 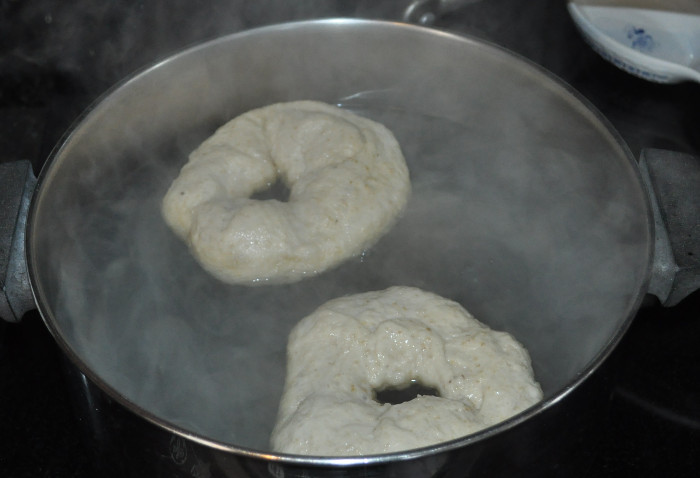 Before they can be baked they need to be boiled. The idea is 60 seconds on each side. (More time makes them chewier.) I’m not sure exactly how long these Bagels boiled. It was a fun new experience, but I need practice to be good at it. (Lot’s of practice!)

Since not all the Bagels would fit on one pan I baked the first two I boiled while I was boiling the rest of them. The suggested temperature was 450 F, and the time 10 minutes or until browned, with the pan turned 180 degrees half way for even baking.

The two shown above went for the full 10 minutes. I was a bit concerned that the bottoms might have been overdone, so didn’t bake the next four quite as long. 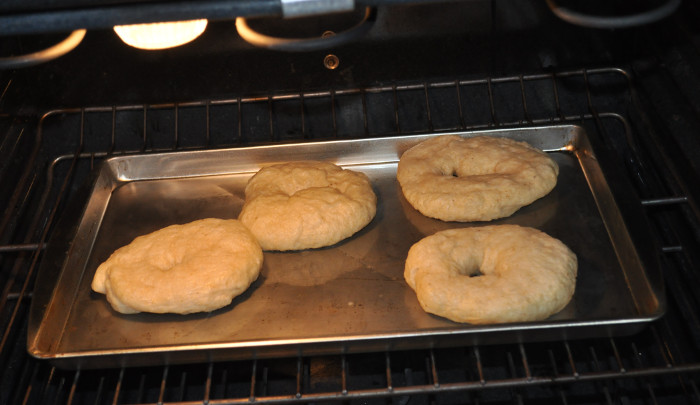 Four Bagels went into the oven in the second batch. On the left they are just into the oven. On the right I have turned the pan 180 degrees to get them to bake evenly. Notice that the pan has popped from the heat and uneven distribution of food in it. It looks a little weird, but no harm done. 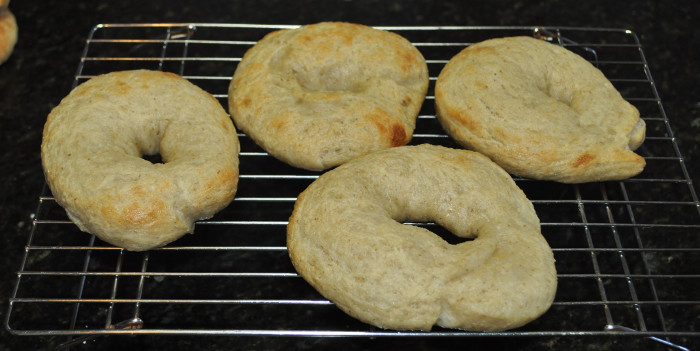 Here are the four out of the oven and cooling. After the first two were cool enough to handle I saw that the bottoms where they touched the pan were not overdone and I realized that the four could have been left in a bit longer. They are done, but would have looked better with a bit more browning. The last two stayed in the full ten minutes and browned nicely.

This shows all eight Bagels. The first two baked are on the left, the last two on the right. The four in the middle look a bit pale, but they are baked nicely, just lack browning.

Here are the same eight Bagels, in the same relative positions. The left two and the right two are darker on the bottom than the middle four, but they are not overdone, just darker. Next time I will bake them all until they are nicely browned.