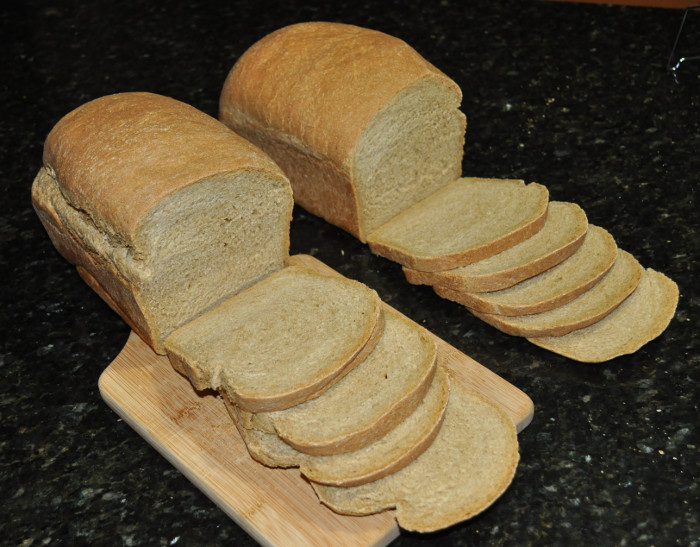 The Light Rye from part 1 came out well in the bread machine. Based on that loaf I decided to scale up the formula to make two loaves and bake them in the kitchen oven. Here is the scaled up formula:

The break in the list separates the liquids from the dry ingredients. They are listed that way since for this batch I measured them separately. There are no caraway seeds listed, but the scaled amount for this size batch would be 9 grams. I left them out for two reasons. First, my wife said she thought they were too strong. Second, I had put caraway seeds in some oatmeal bread at one point, and it tasted just like the seeded rye bread from the store. I decided that I would make it without seeds to see what rye bread was like. It was good and I didn’t miss the seeds. 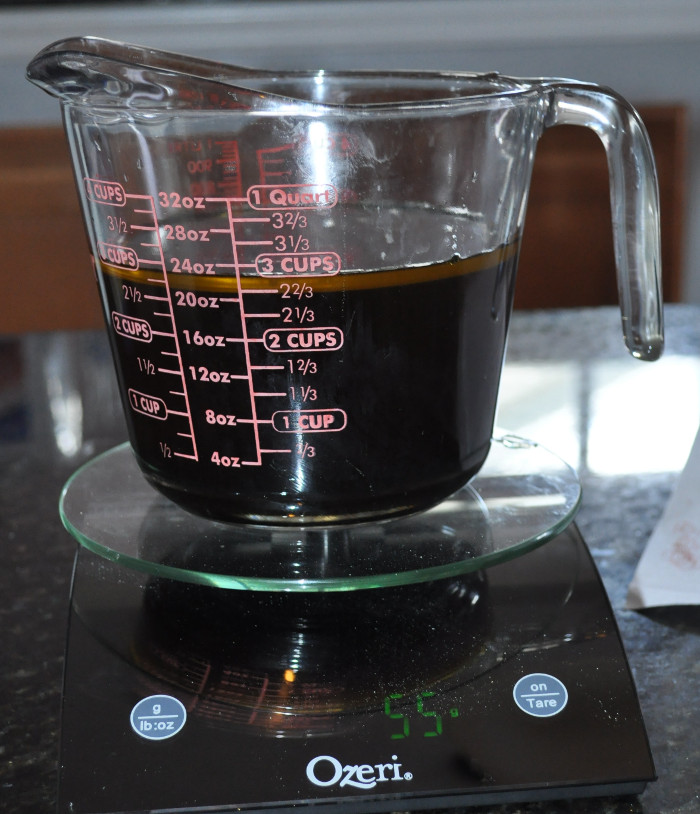 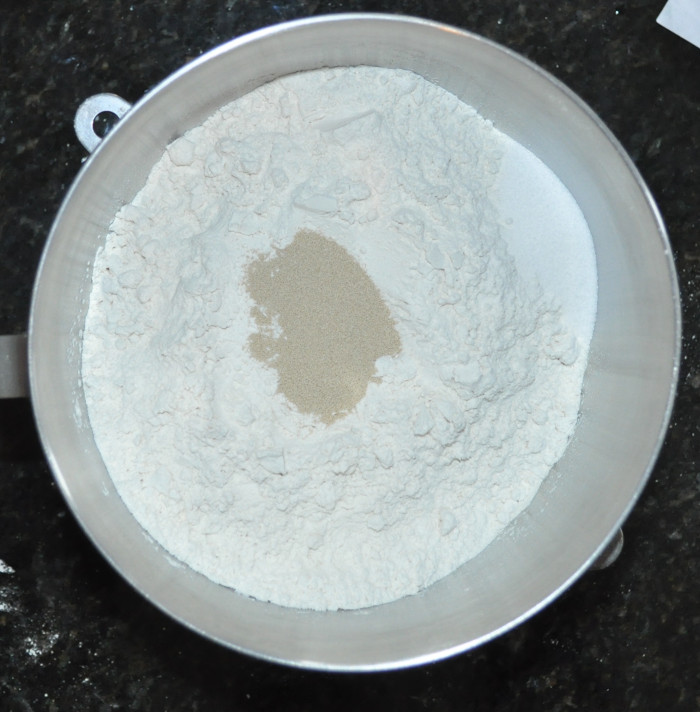 The liquid ingredients are on the left. The scale shows 55 grams, the weight of the olive oil, which was the last one added and can be seen floating on the molasses water mixture. The dry ingredients are on the right. The yeast shows up clearly, but the bread flour, rye flour, and salt all blend together since they are all pretty much white. 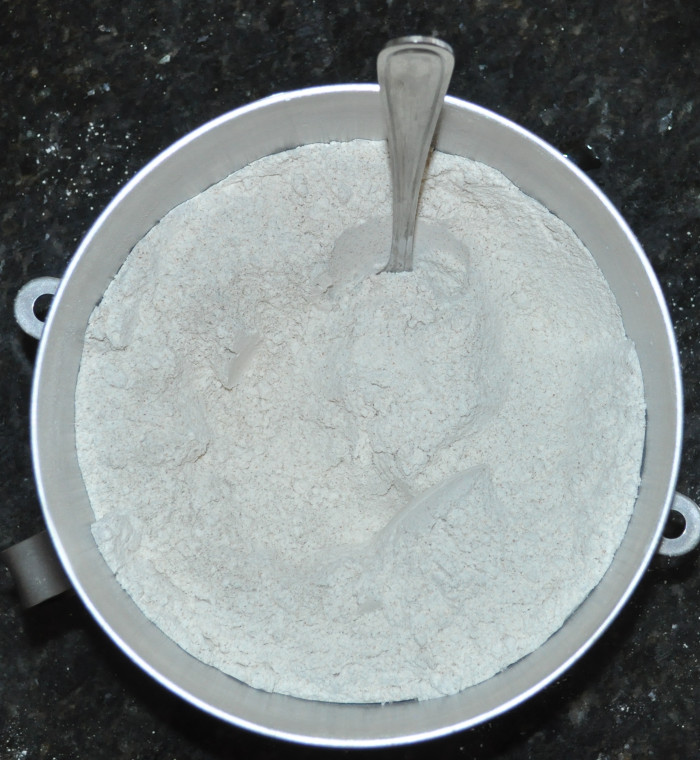 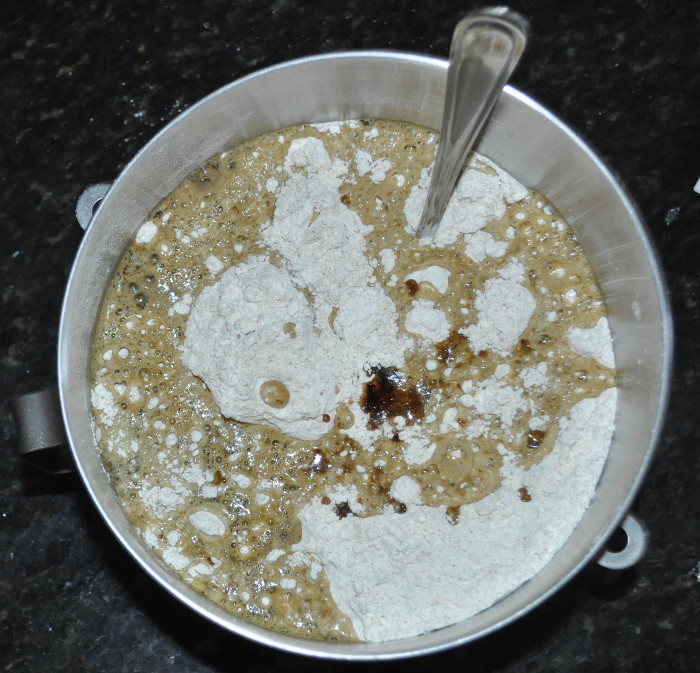 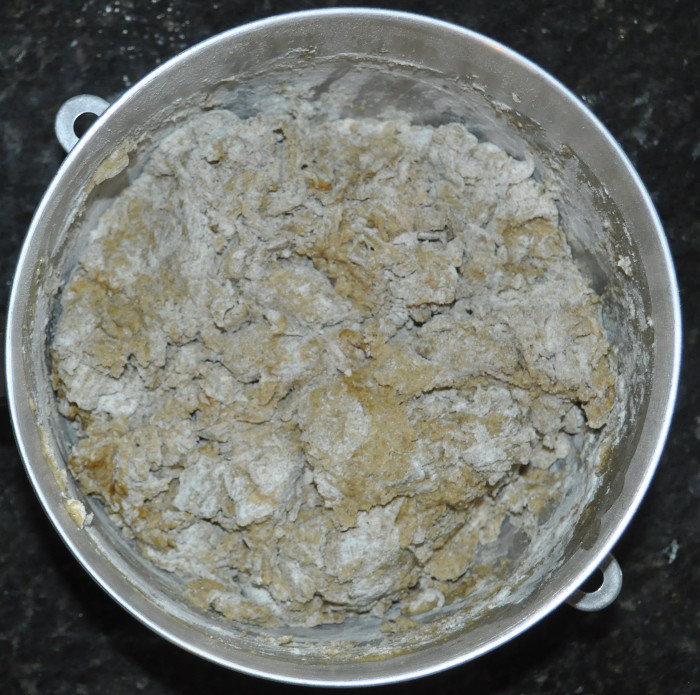 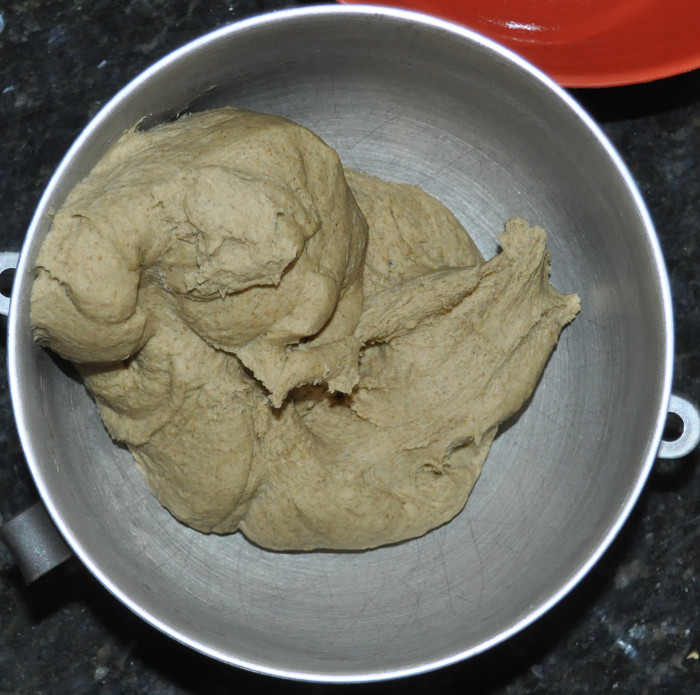 The left photo here shows the result of hand mixing with a spoon to wet the dry ingredients. This keeps the dry flour from flying when the mixer is started. On the right is the dough after 4 minutes on the bread hook after the dough had formed a ball. This was a total of about 5 minutes on the hook, and the machine was working hard. I think this amount of this dough was the limit for my machine. 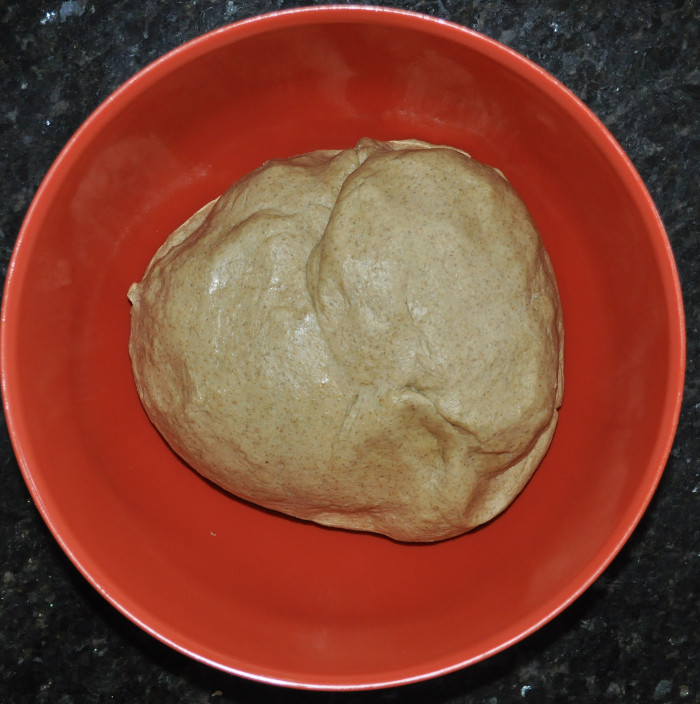 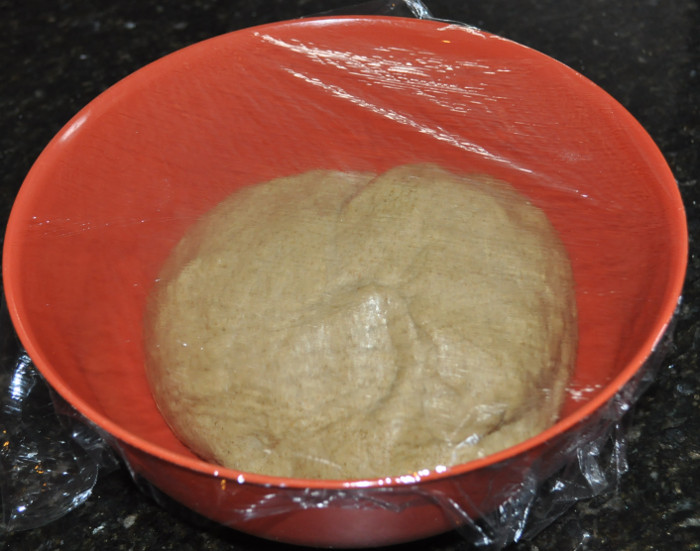 For the first rise (bulk ferment) I left the bowl on the counter rather than using the microwave and hot water to speed things along. The two pictures here are of the dough at the start of the first rise. On the left it’s in the bowl and on the right it’s been covered with plastic wrap to keep it from drying out. The bowl was given a spritz of spray oil and the dough ball was rolled around to coat it so that it wouldn’t stick. 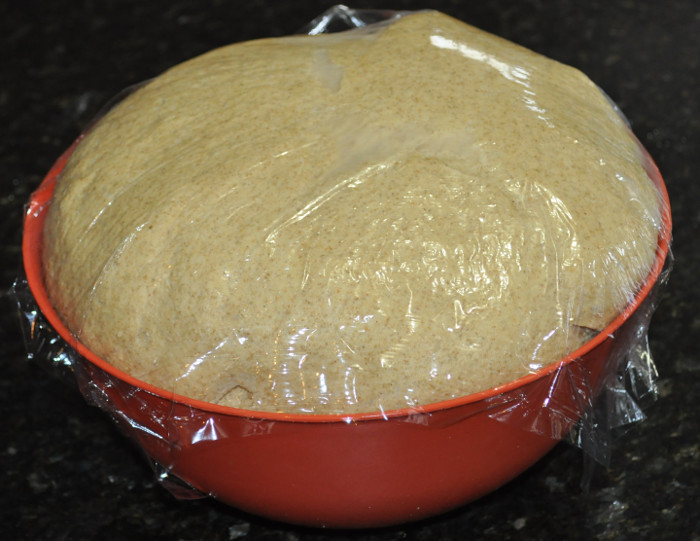 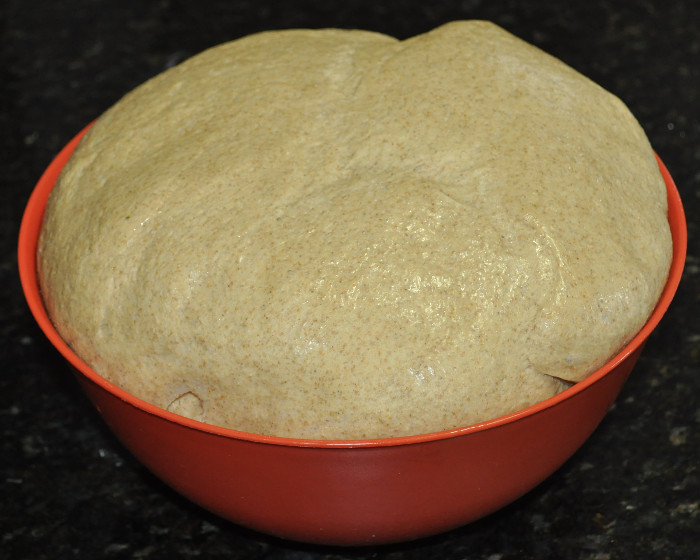 The dough fermented about 105 minutes on the counter at room temperature. The plastic wrap is still on it in the left picture, and it is off in the right one. It came right off without any sticking. 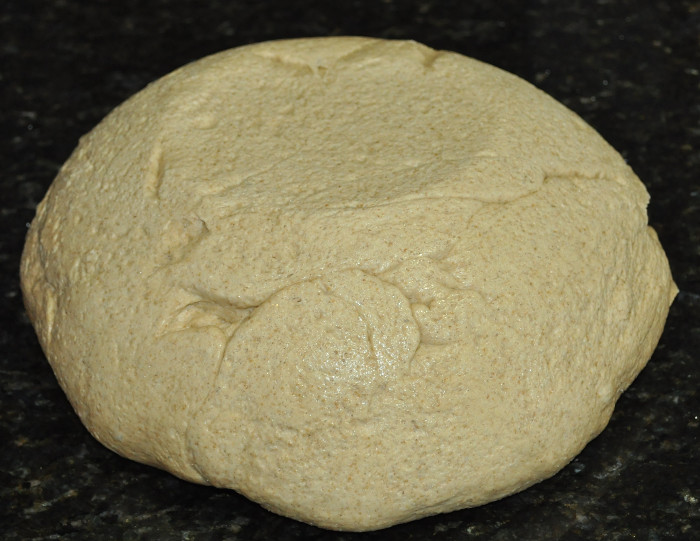 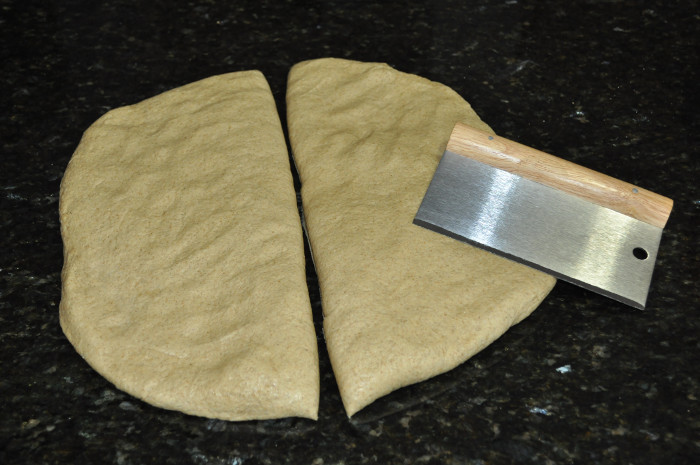 The dough came out of the bowl readily when I held it upside down and shook it a little. In the right photo it has been punched down and divided in two using the bench scraper. 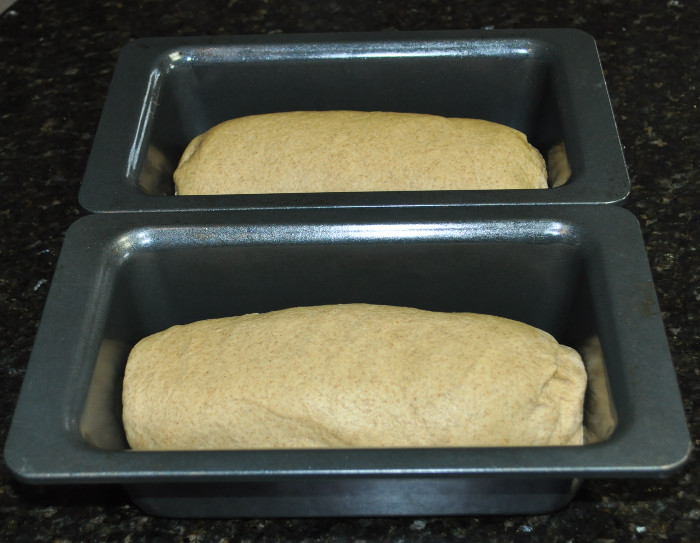 With a little adjusting and use of the scale I had two loaves of mostly equal weight (890 and 892 grams before baking.) The formed loaves are seen in these two photos at the start of the proof rise. 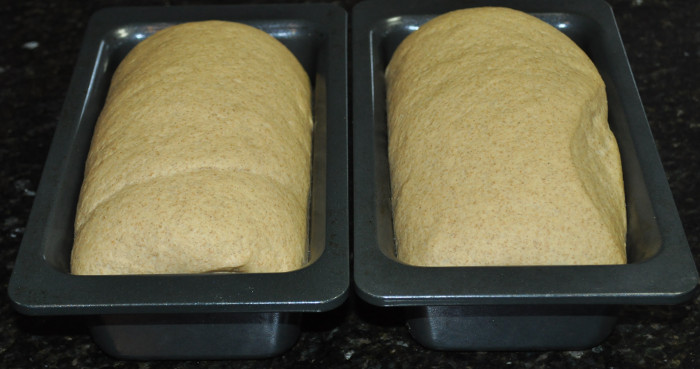 The loaves are shown here after 40 minutes, doubled in size and ready to be baked. 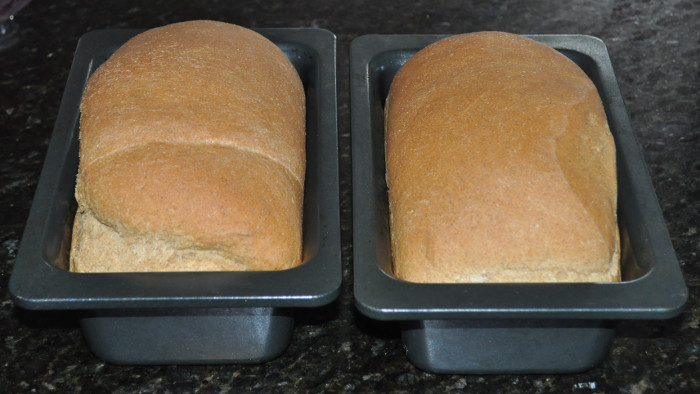 Here art the baked loaves, after 47 minutes at 350 F. I had planned on 45 minutes, but was a couple minutes late. Comparing the left photo above with the similar photo of the loaves at the end of the proof rise it can be seen that there was some spring in the oven during the baking. 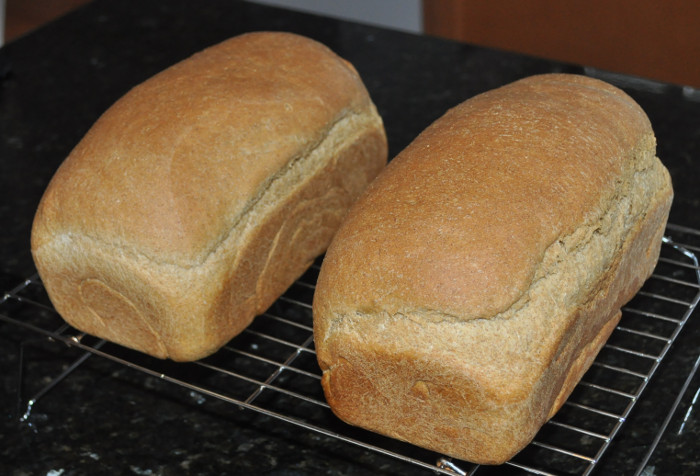 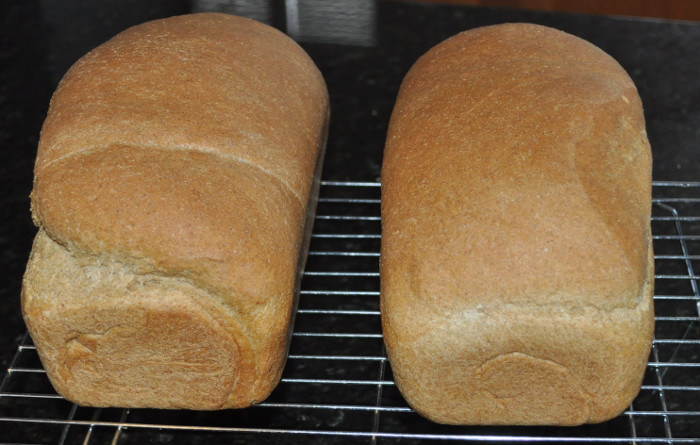 Here are the loaves out of the pans and on the cooling rack. They weighed 828 and 827 grams as they came out of the oven, for an average loss of about 63 grams, or about 7%. They probably lost a bit more as they cooled, but I didn’t weigh them again so I’m not sure how much. 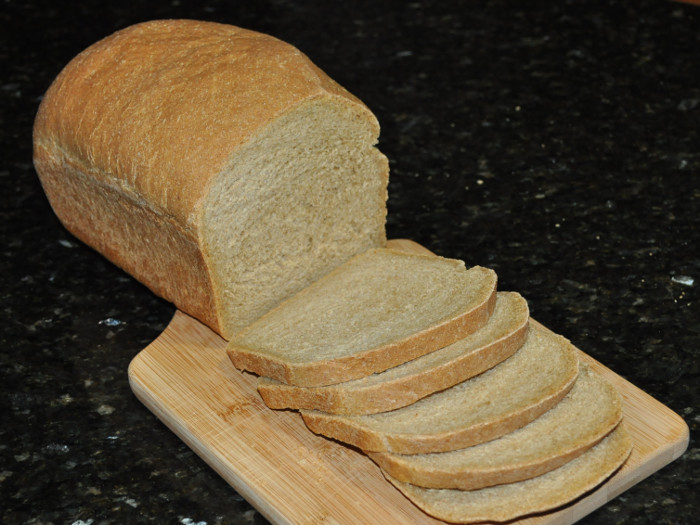 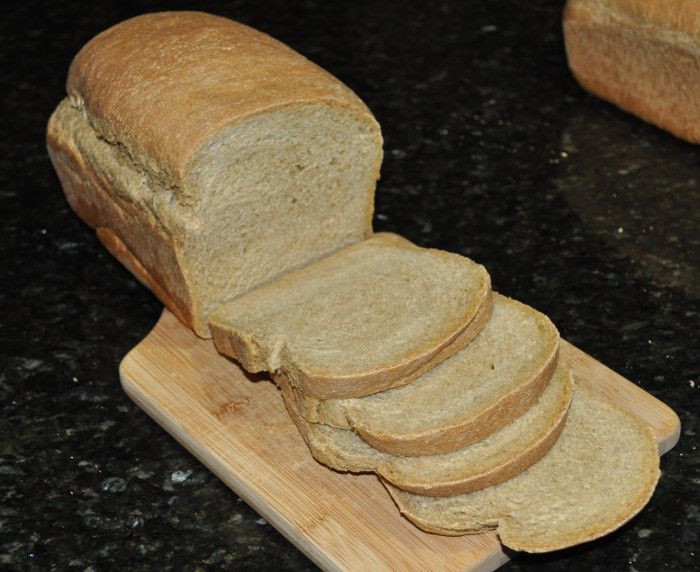 Here a two loaves, cooled and sliced. They sliced nicely, tasted good, and were a success.