We may be living in Florida, but we came from New England. There’s only one acceptable roll for your hot dog and you can’t find one in Florida. The solution is to make them yourself.

Here one is, ready to eat. It’s split in the top, not the sides, and the sides are toasted in butter. This one happens to have some nicely burned kielbasa in it, but it’s a real hot dog roll.

We visited Boston a while back, and brought home some New England style hot dog rolls. They were in the freezer and were keeping pretty well. I’d nuke them a bit in the microwave to partially thaw them, then fry them in butter to toast them so they were ready for the hot dog. The supply was getting low when I came across this post on the King Arthur Flour blog. It was simple, I had to have the pan to make some. Since the last pans I mentioned here were 88 cents each at Wal-Mart I did some looking before I bought the New England Hot Dog Bun Pan. I found it on Amazon for the same price of $29.95 and with the free two day shipping that comes with Amazon Prime saved a few bucks.

I was impressed with the quality of the pan when it arrived. With reasonable care I don’t think I could wear it out if I tried – it is a quality piece of work. The instructions that came with it said not to grease it. The recipe said to lightly grease the pan. I gave it a quick spritz with spray oil. If you look closely at the photo you can see the way that the light coating of spray oil globbed up on the pan’s coating. I wiped off the globs before I put the dough in and spread what was still there around. The baked buns came out of the pan without a hint of sticking.

I prefer to use weight for ingredients over volume since it’s more consistant, especially for things like flour where how tightly you pack it can make a big difference. I measured thing out by volume, and weighed them so that when I made them the again the recipe would be the same. Here are the weights:

Weigh and mix the dry and the wet ingredients separately, then mix the two together. Once the wet and dry are mixed they can be kneaded to make a smooth and pliable dough. 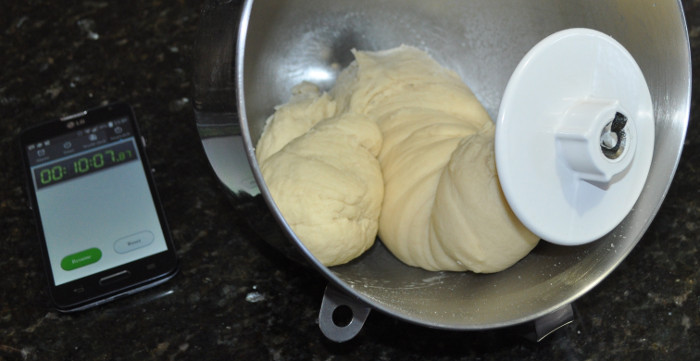 Here is my dough after kneading 10 minutes on the dough hook. I used the stop watch on my phone to time it. I have an older Kitchen Aid mixer (model# KSM5PS0) with a “C” style bread hook. After making batches of dough in many sizes it is apparent that the efficiency of the hook depends on the size of the batch. There needs to be enough dough so that the hook pushes the dough against the side of the bowl. Otherwise the dough ends up wrapped around the hook and just goes around in circles without any significant mixing or kneading action. The size of the batch to make the hot dog buns seems to be at the lower end of the size range. Notice how in the photo of the dough on the hook at the end of 10 minutes how much of the dough is wrapped around the hook. The extra lump not on the hook was squeezed against the bowl which provided the mixing and kneading action needed to develop the gluten.

The spiral style of dough hook doesn’t have the disk at the top. It doesn’t need one because it’s action is to push the dough down into the bowl rather than just squeezing it against the sides of the bowl. As the picture above shows the dough tends to climb up the “C” style hook. I would like to try the spiral style hook but I have read that the bearings on my mixer are not set up to handle the upward force on the hook that the spiral style generates. 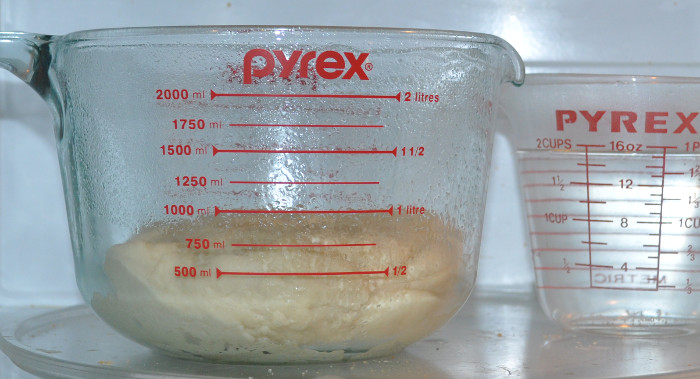 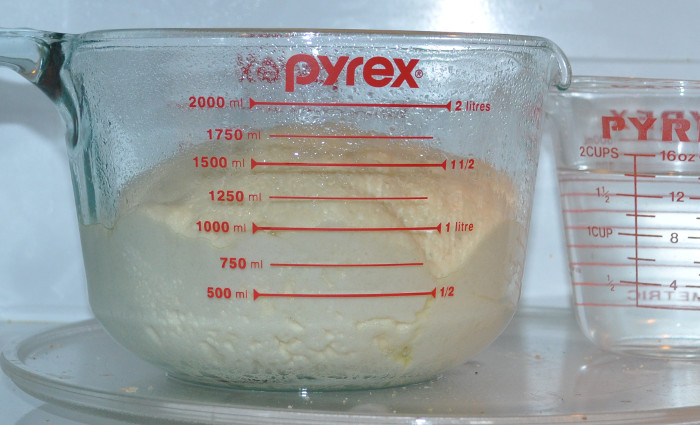 When I bought the big Pyrex® measuring cup I had no idea if I’d ever have a practical use for it. I bought it anyway because I’d never seen the 8 cup size before. As the pictures show, it’s ideal for determining when dough has doubled.

After punching down the dough flatten it out and fit it into the pan. If it springs back from the corners let it rest a few minutes and spread it back out so it covers the whole pan.

When the dough has relaxed enough that it can be spread to cover the whole pan let it proof. Let it proof until the dough fills the pan about two thirds full. The photos above show before and after proofing.

The dough will spring quite a bit when it bakes so it doesn’t need to fill the pan completely before it goes into the oven. Because the dough springs a lot the pan should have a weighted cover on it while it bakes. A half sheet pan makes a good cover, and a heavy cast iron skillet is a good weight to use to keep the dough from springing too much.

Bake 18 minutes in a preheated 375 F oven. The left picture above shows my hot dog buns in the oven just before they came out to cool down. As you can see, the cast iron skillet I used for a weight wasn’t heavy enough. The right picture shows them in the pan. They were shaped a little funny, but still good.

Here they are out of the pan, cooling on a rack, turned so that the tops are up (the tops of the buns are down in the pan.) 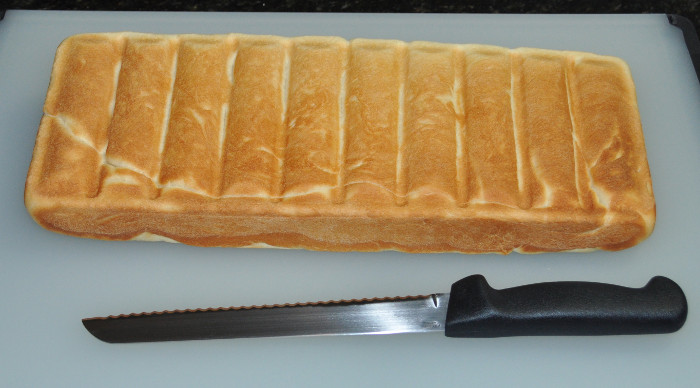 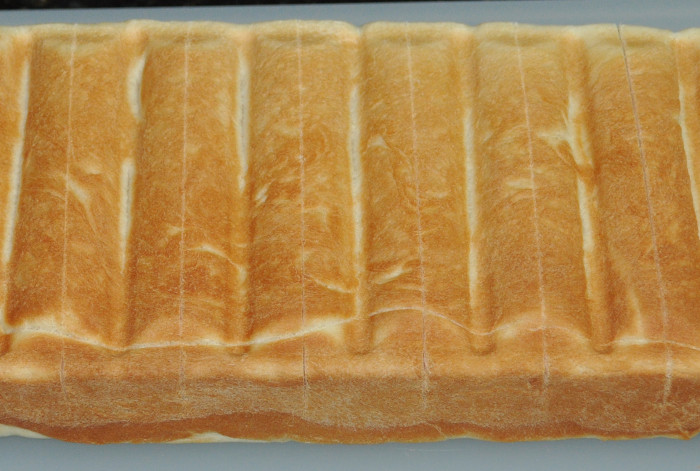 On the cutting board with the bread knife, cooled and ready to be cut into New England Style Hot Dog Buns. The right photo shows the first cuts in the center of the buns where the hot dogs will go. This cut doesn’t go all the way through the bun, it leaves 1/4 inch or so uncut at the bottom to hold the sides together around the hot dog. 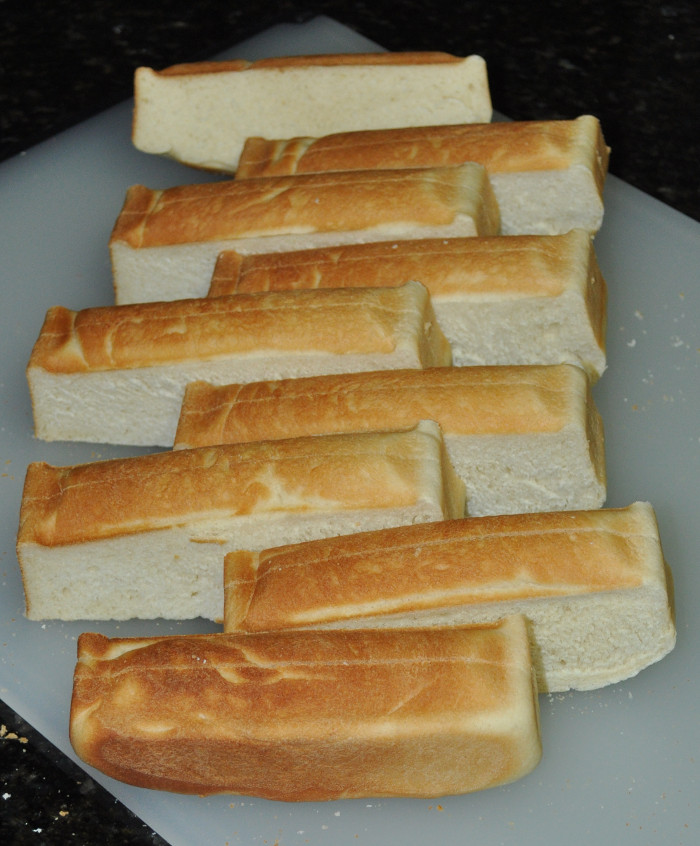 Here are the buns ready to be toasted, filled with your hot dog, and enjoyed. There are only nine showing because number 10 is already getting toasted in butter. It’s also shown in the first picture at the start of this post. 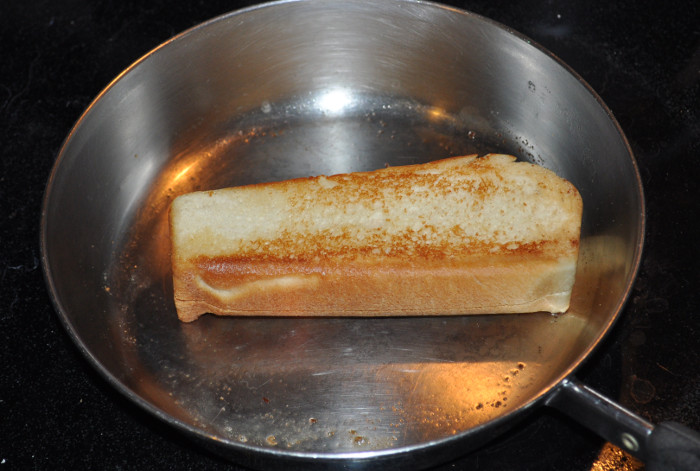 This is a bun toasting in butter, almost ready to fill and eat.