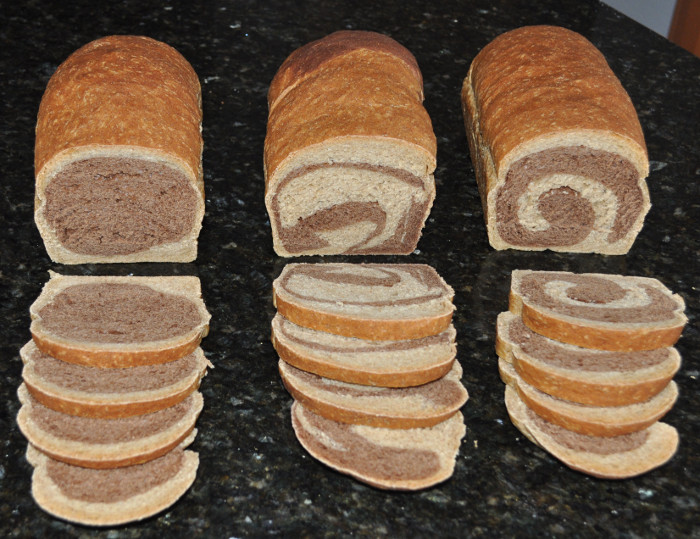 After making light rye bread it seemed logical to me to try to make marble rye. Since I have three identical 8 X 4 loaf pans I attempted three different ways to mix the colors. The results are shown in the photo above. On the left is the bulls eye, the dark round runs down the middle of the loaf with the light in a ring around it. In the middle is an attempt a a marble pattern. The right shows a spiral pattern.

I was surprised to find that the only real difference between light and dark rye is the addition of coffee, carob, or cocoa to add the dark color. Since I don’t care for coffee and carob seemed a little on the exotic side, I decided to use cocoa since I like chocolate. The recipes for the light and dark rye bread are below. The dark differs from the light in two items. First is the addition of 25 grams of cocoa to the ingredients. Second, there are 5 grams more water to compensate for the added cocoa.

These recipes are simply half of the recipe in the previous post Light Rye Bread – part 2. The dry and the wet ingredients were measured separately before combining. That allowed me to mix the oil and the molasses into the water to insure that the molasses was mixed in well. The wet and dry were combined and mixed enough by hand to wet the flour. Then they were mixed on the bread hook for 4 minutes after the dough ball formed. 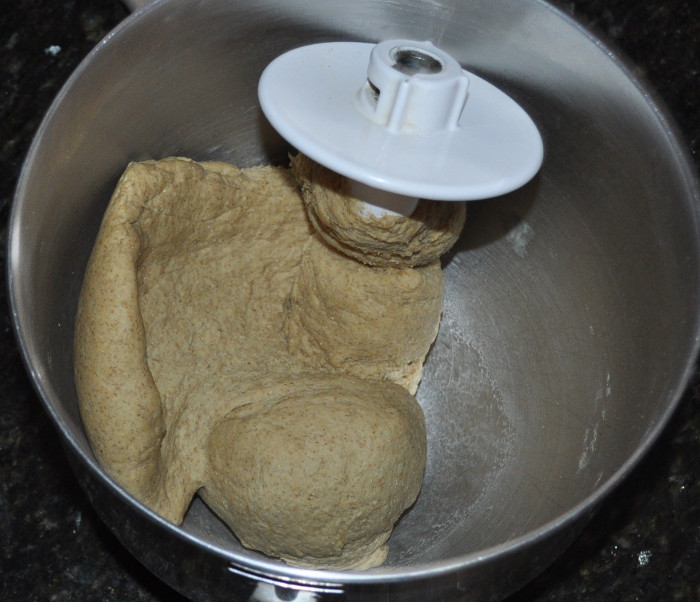 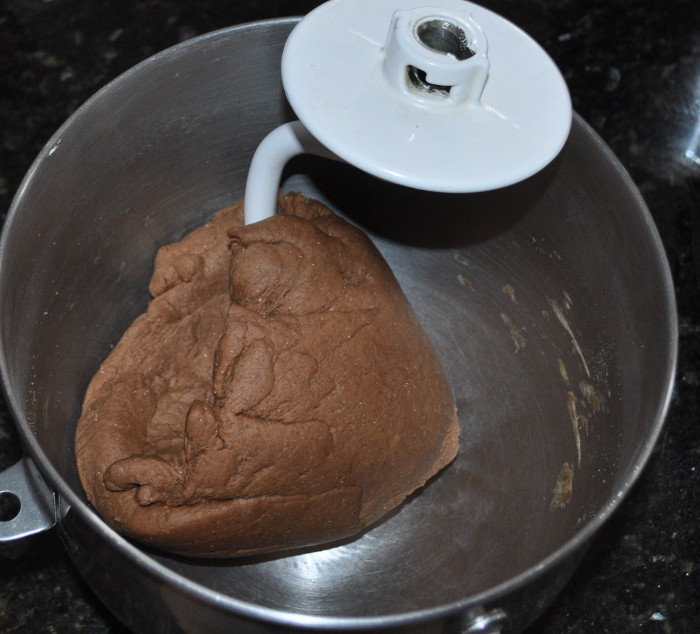 The first pattern is the bulls eye. For this I flattened the light rye out into an oval, and formed the dark into a torpedo shape, as in the left photo. Then the light was wrapped around the dark. The seam was sealed up and placed in the bottom of the pan to proof. After looking at the slices it’s apparent that the two colors would be better balanced with more of the outer color and less of the bulls eye. 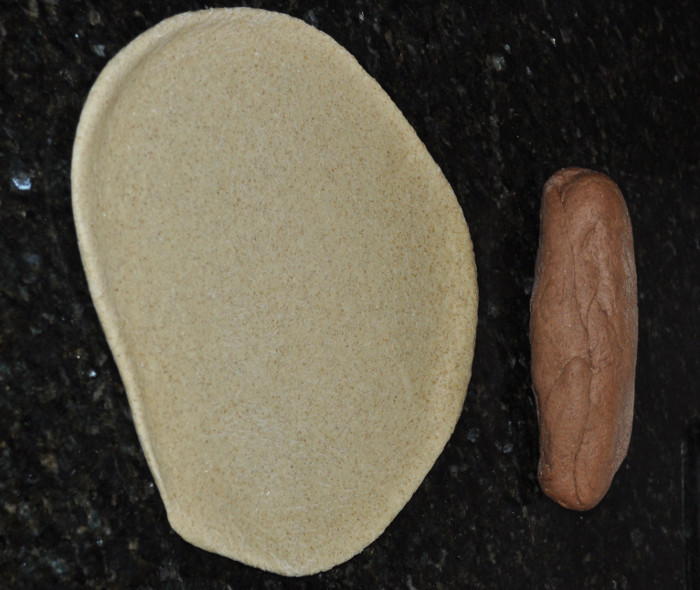 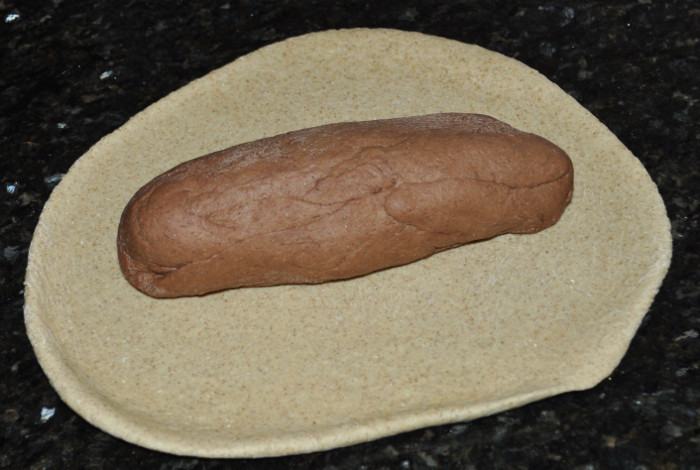 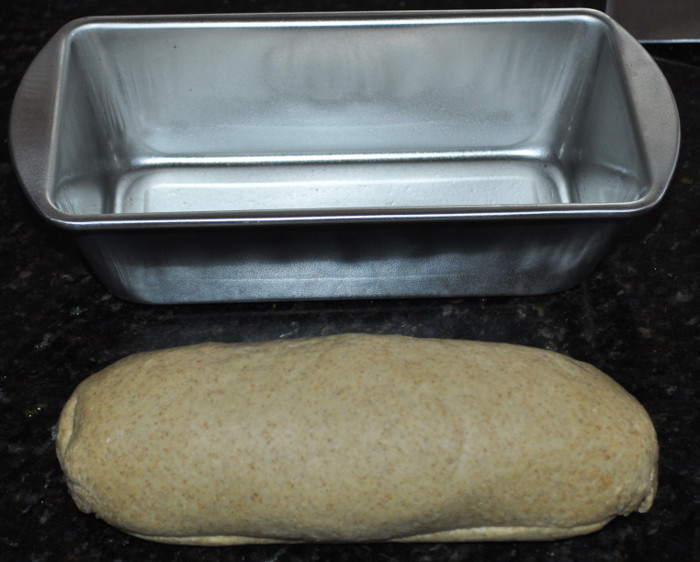 For the marble pattern the dough was divided into 16 equal parts, then put back together in alternate colors in two rounds of 8 pieces each. The two round were stacked so the colors alternated up and down and the whole was smooshed a bit and formed into a loaf. The result was disappointing, by trying to put some order into it the marbling was poor. Next time I will try more pieces and try to put more twisting into the loaf. 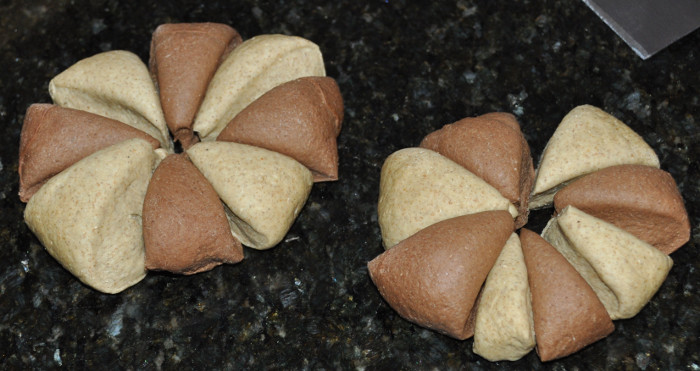 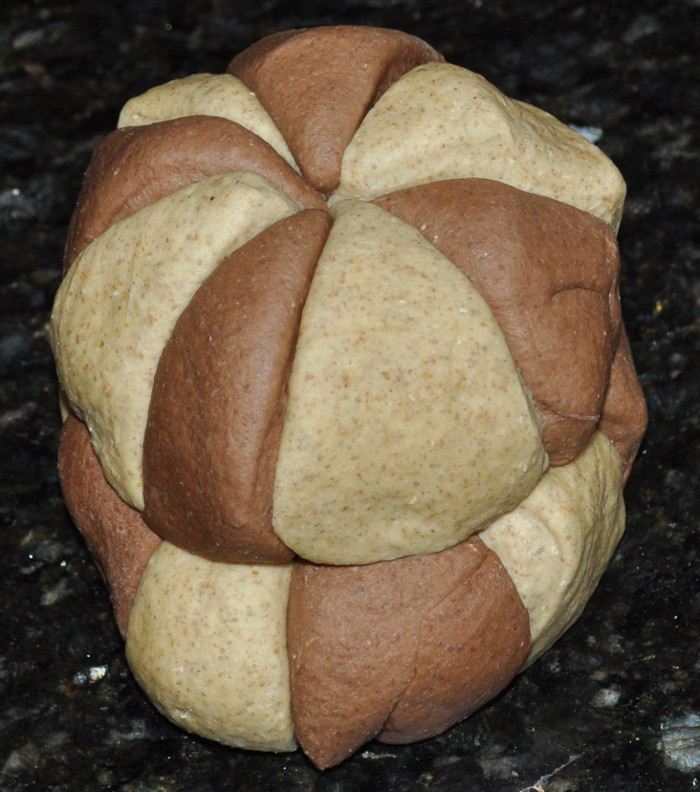 The spiral is the one that came out the best. The two colors were flattened out into ovals, laid together and rolled up. The result was a definite spiral in the slices. Thinner would have been better, creating more turns in the spiral. 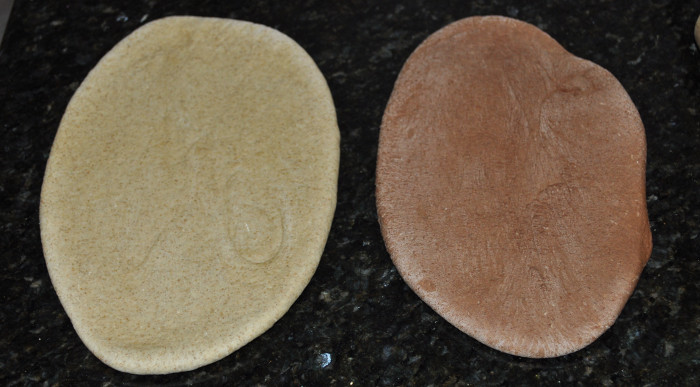 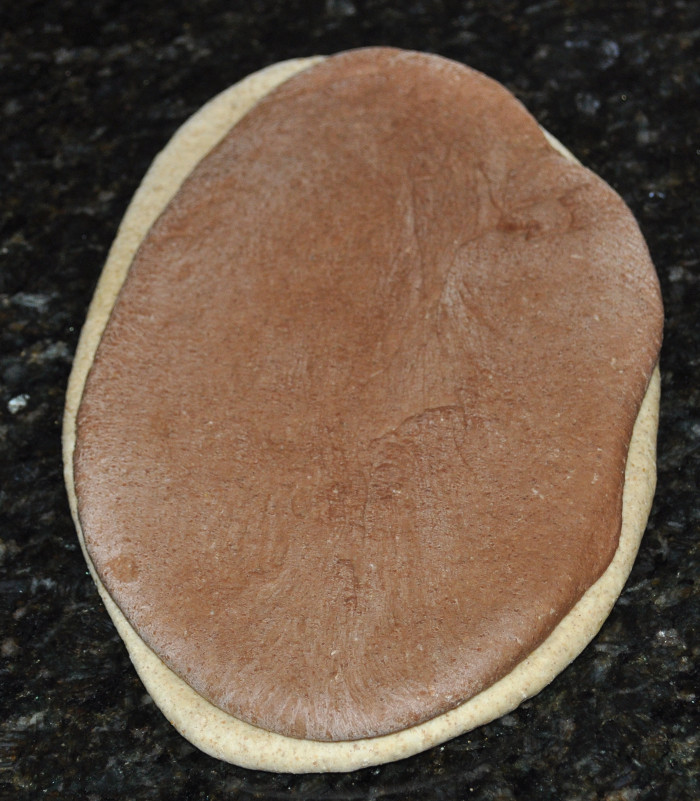 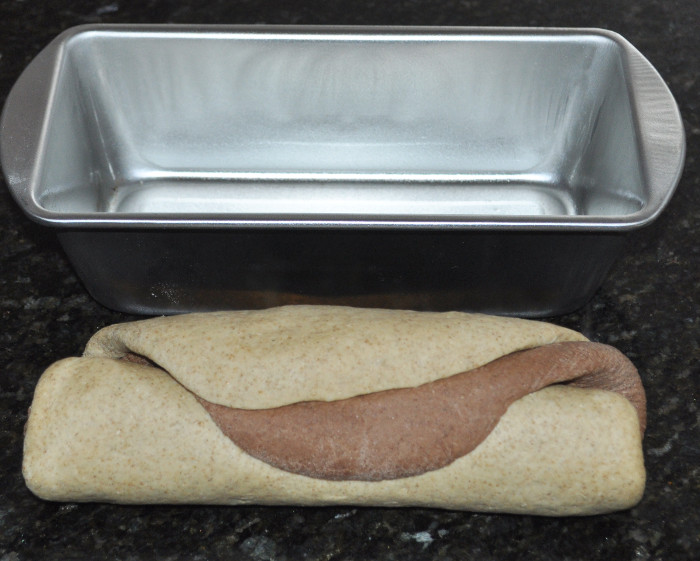 Here are the three loaves, before proofing on the left, after on the right.

The left photo shows the proofed loaves in the microwave where they were proofed. The right photo shows them in the same order, after baking to show the spring from baking.

This last series of photos shows all the slices from the three loaves. Although the resulting patterns are not as nice as I would have liked, the bulls eye and spiral are recognizable and the marble is believable if not great. A reasonable first try, and plenty of room to improve. 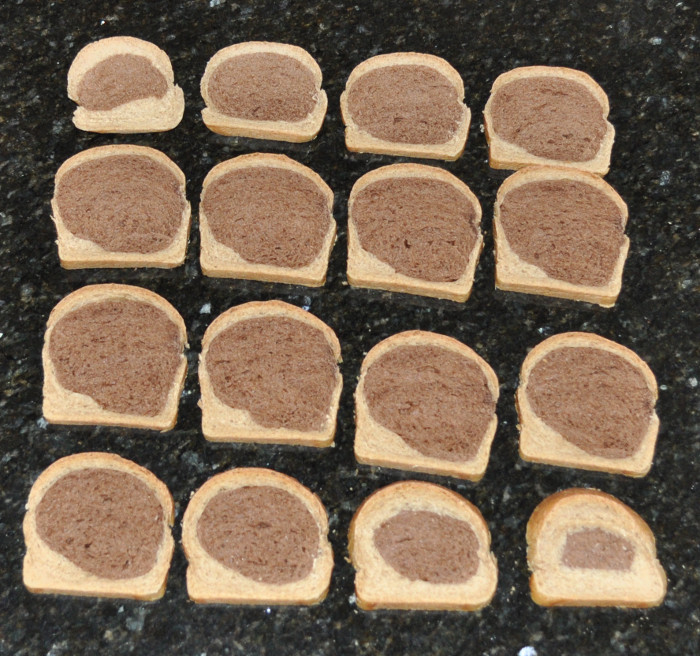 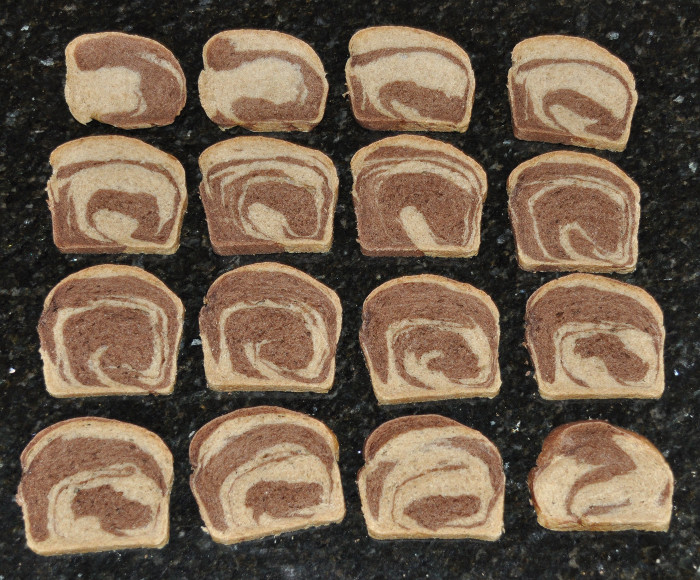 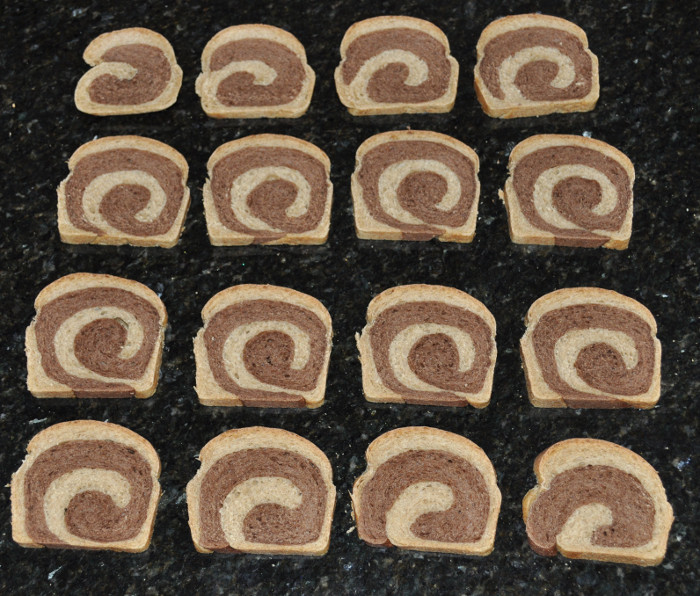