has White Bread in three variations. This is White Bread, Variation 1. Between Variation 1 and Variation 2 the ingredients are slightly different. Variation 3 introduces a sponge that is allowed to ferment before the final dough is mixed. 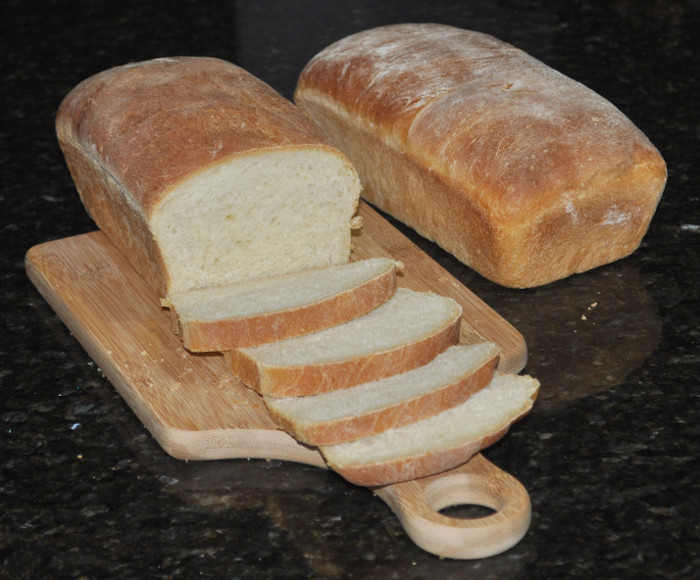 Variation 1 uses water as the liquid and has powdered milk as an ingredient. Here is the recipe to make two one pound loaves, the size specified in Reinhart’s book.

The ingredient list above is divided into two sections. The first section is the dry ingredients, the second section is the liquid ingredients. The book recommends melted butter, margarine, or shortening at room temperature rather than the olive oil I used and show in the list.

Combine the dry ingredients in a bowl and mix them together. The book suggests that the egg be slightly beaten before adding. I put all three of the wet ingredients together and wisked them to get the egg distributed and so the egg and water would be in an emulsion with the water and nothing would stick to the bowl they were weighed in.

When mixing bread dough it is sometimes necessary to add extra liquid or flour to get the proper consistency in the dough, and I needed extra flour here to get dough that felt right. I’m hardly an expert, but I realized right away that my dough was too soft and sticky. Looking back with 20/20 hindsight I realize that it was a mistake to put the whole egg in, since it weighed 58 grams, 18 more than called for. Next time I will only use the amount called for.

When I was a kid my brother had a pet duck, Daisy. She laid an egg every few days and they were huge. My mother used them baking cake and brownies and such and everyone raved about how rich and moist everything was. The extra liquid didn’t cause problems in them. Bread dough is fussier than brownie dough, the amount of water for the flour (hydration) makes a big difference in the dough and it’s behavior. I might have had to add some extra flour even if I’d used the right amount of egg, but I doubt it would have been the whole 65 grams extra I had to add — that’s more than an extra 10%. 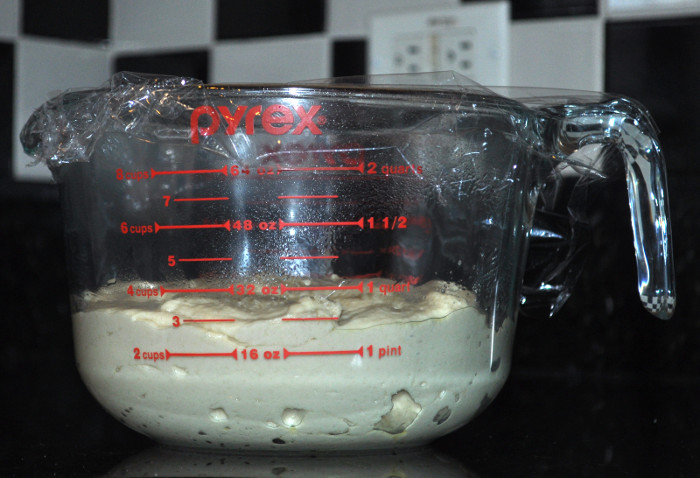 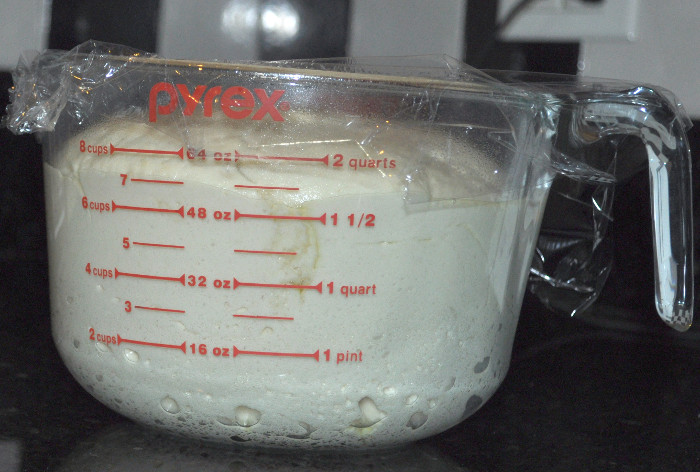 Add the liquid ingredients to the dry and stir until all the dry ingredients are moistened and it forms a ball. When the ball formed I moved from the 4 quart bowl where the dry ingredients had been and ran the dough hook on my Kitchen Aid mixer for 6 or 8 minutes after I was done adding the extra flour needed. Even though I messed up with the extra egg and added a lot more flour, the dough was very nice when I finished kneading. The left photo shows the dough in the eight cup measuring cup before the bulk ferment. I had to do something and didn’t get back to it for 2 hours when 60 to 90 minutes was the expected time to double. It was a bit more than double, but that didn’t seem to cause a problem. 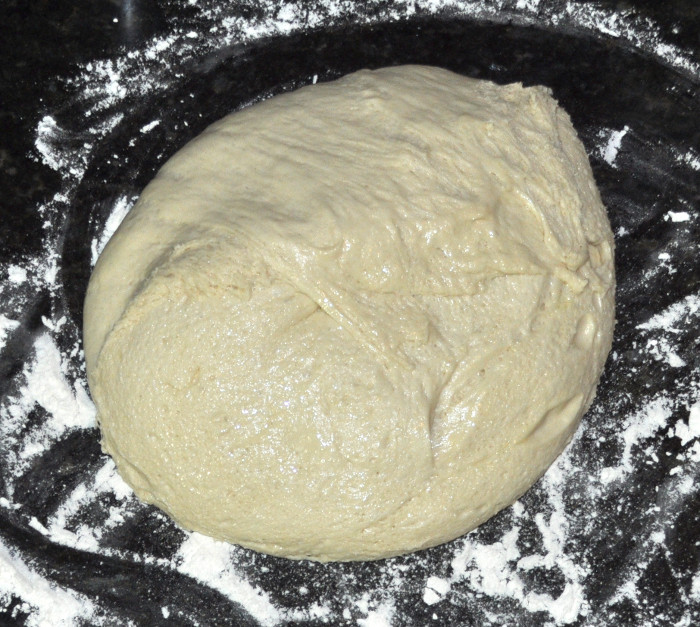 Here is the bulk fermented dough, dumped out onto the floured granite counter for degassing or punching down and forming into loaves to go into the bread pans. The dough was a pleasure to work with. Not sticky but almost silky feeling to my floured hands. 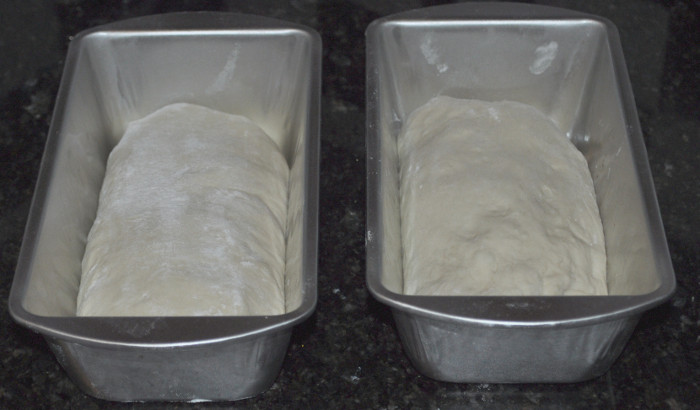 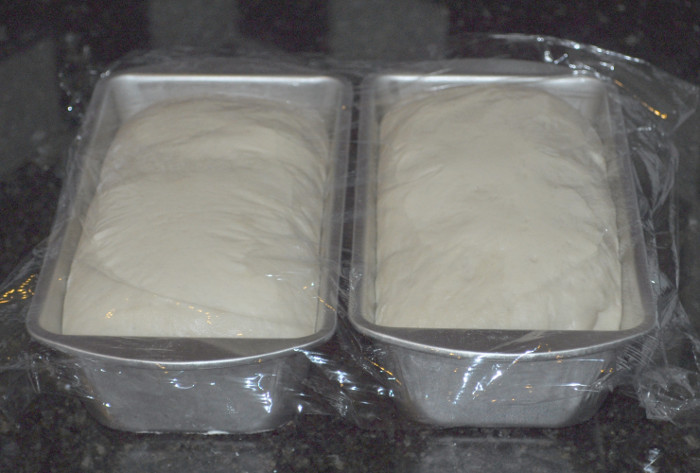 Here are the formed loaves in the pans. After the left picture was taken the loaves were lightly sprayed with oil and covered with plastic wrap. Proofing was done at room temperature sitting on the kitchen counter and took 100 minutes. Before proofing on the left, and proofed on the right, still covered with the plastic wrap. The pans are 8.4 by 4.4 by 2.5 inches, currently 88 cents each at WalMart. 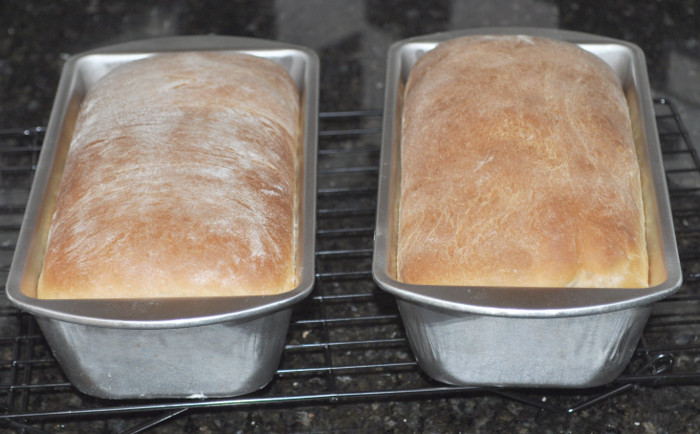 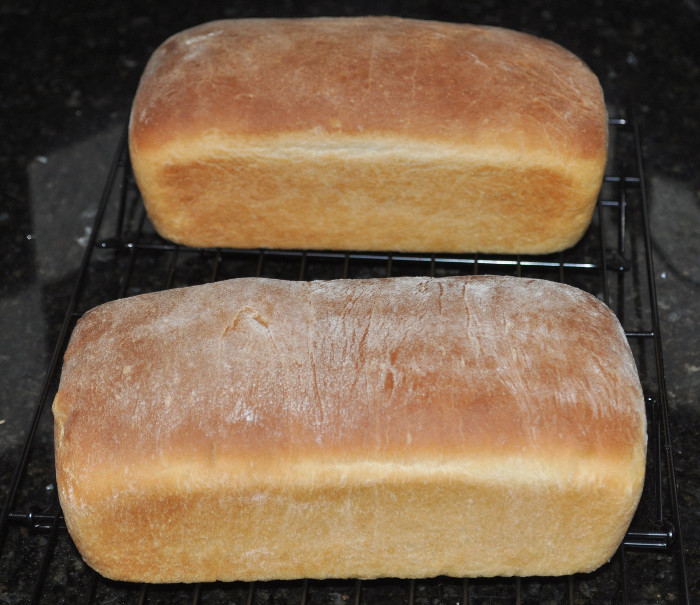 The baked loaves are on the left, still in the pans. Comparing to the photo of the proofed loaves it’s apparent that there was some, but not a lot, of oven spring. The right photo shows the two loaves on the cooling rack. They baked for the suggested 35 minutes at 350 F. The loaves are done when the internal temperature reachs 180 F. I checked the internal temp when they came out of the oven and it was over 200 F, so they were probably done at 30 minutes in my oven.

I’m not a big fan of white bread, but this came out very nice. There are three variations of this in The Bread Baker’s Apprentice

, and suggestions for an assortment of changes to the three basic variations. I will try the three, and probably a few variations on the three variations in the book. After all, a truly great version of white bread would be worth baking and eating over and over.

Next time I make one of these White Bread Variations I know one specific change I will make. The batch size will be scaled to make two loaves in 9 by 5 pans. The 8.4 by 4.4 pans make a cute little loaf, but the slices are too small for a slice of American Cheese. I end up having to make two sandwiches, cutting up the cheese slices to get them to fit inside the bread. I need them inside the bread since if they stick out they melt and run onto the grill making a mess. The small pans are perfect for things like banana nut bread though, where you don’t want a great big slice.

The link I show for The Bread Baker’s Apprentice

points to the 15th anniversary edition of the book. The copy I have is from the 26th printing of the first edition. I pointed the link to the newer edition because although it is not the exact version I have it should be equivalent, and it is about $10 cheaper on Amazon as I write this. After reading some of the reviews comparing the original with the updated version I’m considering getting the updated one at some point.