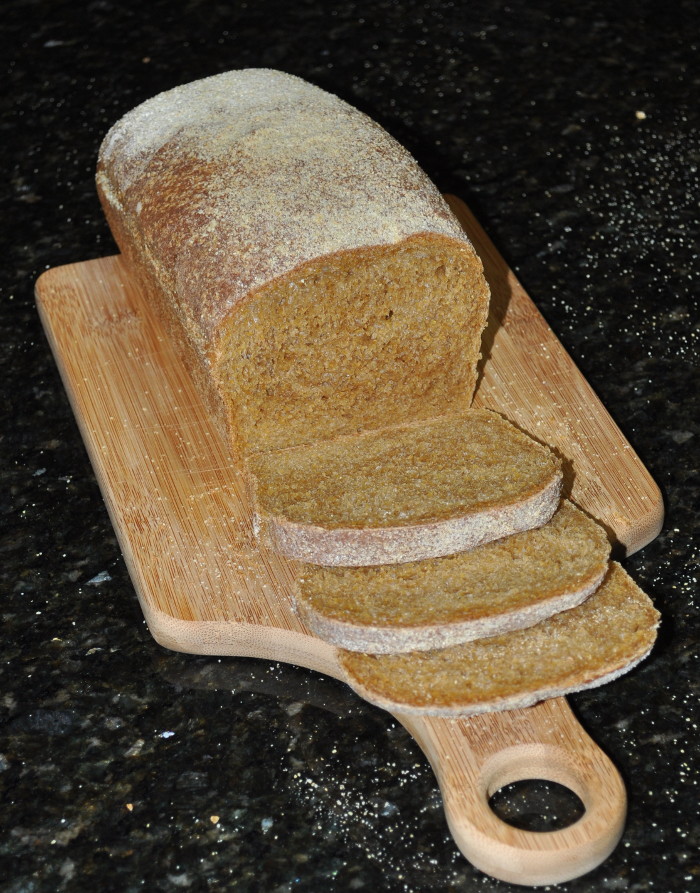 This recipe is in ounces, rather than the blogs usual unit, grams. That’s because I made this directly from the recipe in the book. Usually I put the baker’s per cent formula into a spread sheet and scale things to make the amount of dough I want. I was anxious to try this Anadama bread so I made it straight from the book, other than substituting extra virgin olive oil for the butter or shortening in the official version in the book. The next time I make this bread the units will be grams and it will be scaled to make two 9 by 5 loaves.

The second thing that stands out in the ingredient list above is that there are two distinct sections, The Soaker, and The Dough. This is because the soaker is mixed on Day 1, covered, and allowed to sit at room temperature until the next day, when it becomes an ingredient in the final dough.

Making the dough on the second day starts by making a sponge. To make the sponge mix 9 ounces of the flour, the yeast, all the soaker, and the water. Cover the sponge and let it rest until it starts to bubble. I had to take care of some business, and my sponge had at least doubled. It was foamy and smelled nice and yeasty.

When the sponge is ready it’s time to make the dough. Add the remaining flour, the salt, the molasses, and the oil to the sponge. Mix it until you have a dough ball, then knead. Adjust the hydration if needed by adding water or flour depending on if it’s too stiff or too sticky. I put it into the mixer with the dough hook and started kneading. It was too sticky, so I added flour a bit at a time, kneading it in then adding more if still to sticky. It took an extra 2.9 ounces of flour before the dough was just a bit tacky but not sticky. 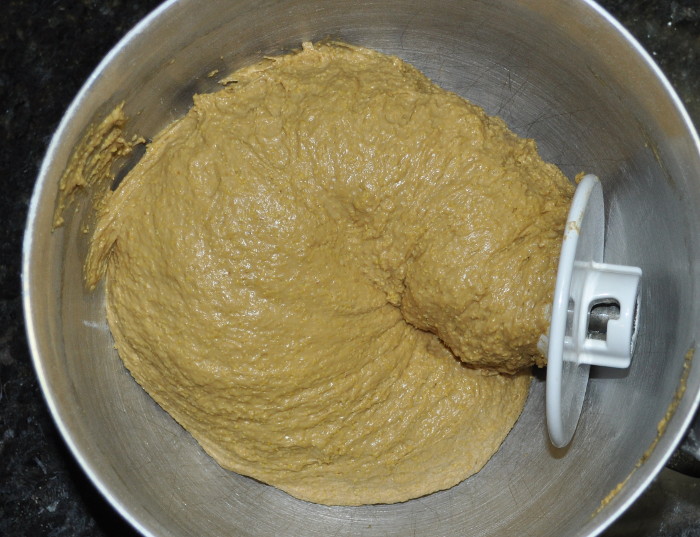 The dough ran on the bread hook for six or eight minutes after I was satisfied there was enough flour in the mix. The picture shows it after I took the bowl off the mixer. The dough was fairly soft and the hook slid down the side of the bowl. It wasn’t sticky, and when I tried to pull a thin translucent “window pane” it passed the test so the gluten was developed. 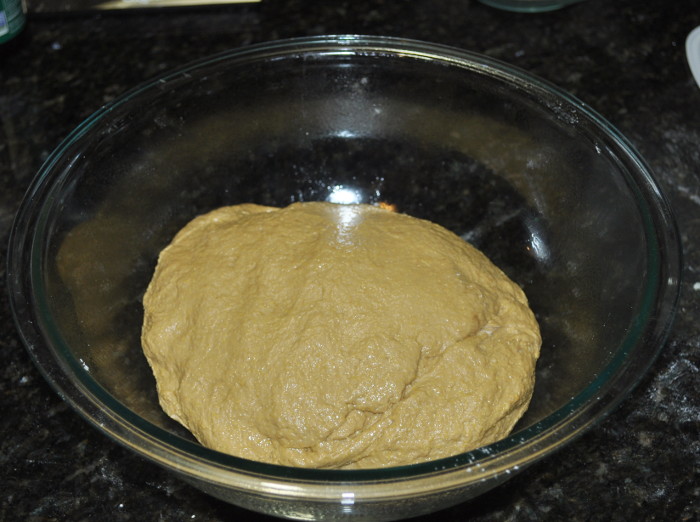 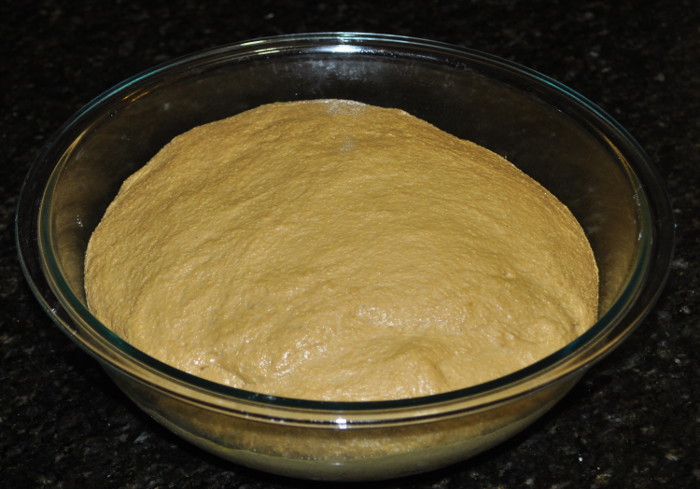 The dough was formed up into a ball and rolled around in an oiled bowl then covered for the bulk ferment. The pictures show at the start of the bulk ferment on the left. On the right is 110 minutes later when I decided the dough had doubled and it was time to form the loaves. 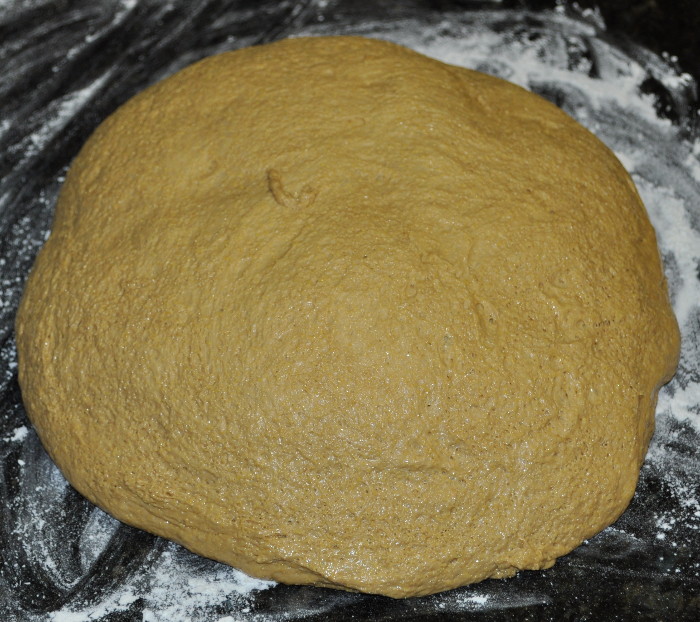 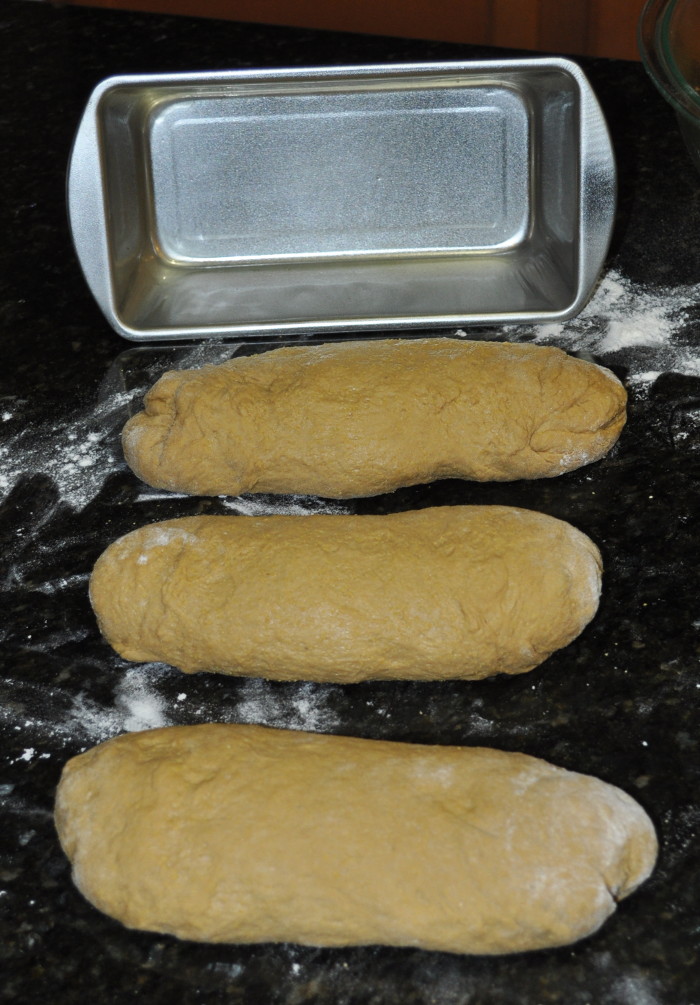 The left photo shows the dough dumped out onto the floured counter. I love the black granite, but it’s not a very good background for the photos. The dough weighed 1408 grams after the bulk ferment.

I wasn’t sure how the dough would handle after I added all the extra flour to get rid of the stickiness and the way that the hook sagged into the dough when I took the bowl off the mixer. It was a pleasant surprise, the dough was soft and supple, not sticky and handled really well. It was so springy I had to let it relax two or three times before it would stay in a long enough shape to fill the pans. The right photo shows the three loaves lined up before one of my 8.4 by 4.4 by 2.5 loaf pans. The three loaves each weighed about 470 grams. 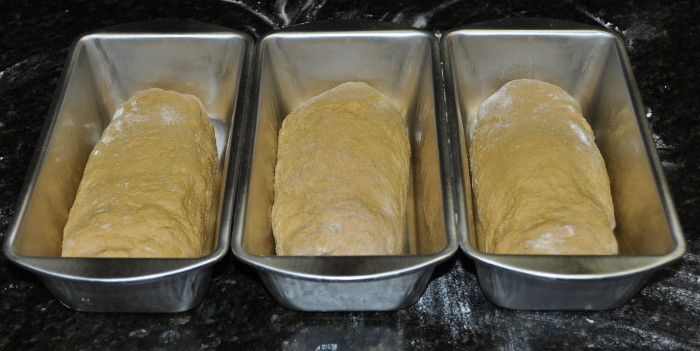 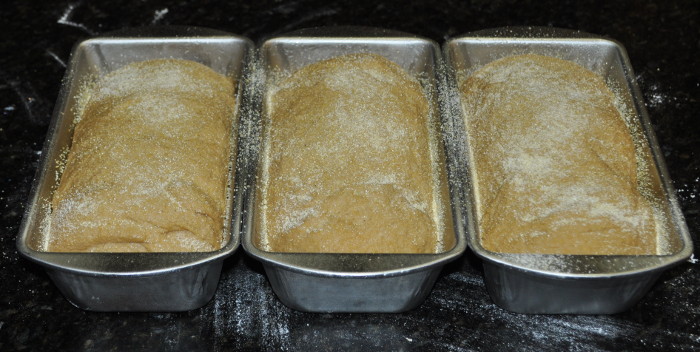 The photo on the left shows the loaves in the pans before proofing. The pans were covered with plastic wrap and left on the counter until the dough rose enough to fill the pans. After proofing Reinhart suggests spritzing the loaves in the pan with a mist of water, then sprinkling on cornmeal. I think I got carried away with the sprinkling, as the excess cornmeal falling off the loaves shows up really well on the granite counter. The photo on the right shows the loaves after proofing, with the cornmeal showing up as white against the beige dough. 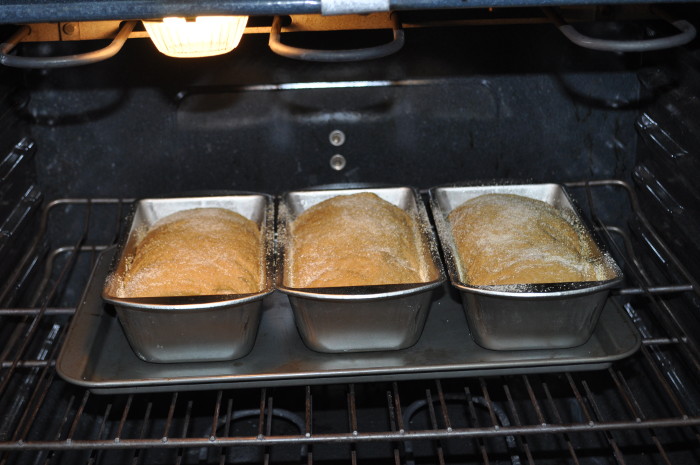 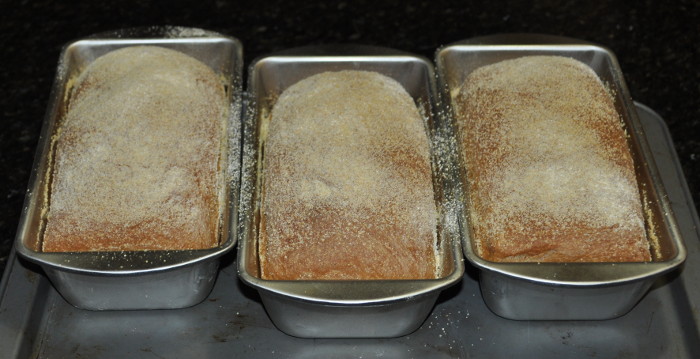 The three loaf pans were placed on a cookie sheet so that they could be turned 180 degrees half way through their time in the oven to promote even baking. The left photo shows them in the oven, on the cookie sheet before the door was closed to start baking them. The oven was set at 350 F. and the baking time was expected to be 40 to 50 minutes. I rotated the cookie sheet at 20 minutes and reset the timer for another 20 minutes. They had browned nicely so I took them out at 42 minutes total. A temperature of at least 185 or 190 F in the center is require for them to be fully baked. I probably should have taken them out a bit sooner as I got a reading of 208 F in the center of a loaf.

The right photo shows the three loaves in the pan after coming out of the oven. The cornmeal on the top of the bread shows up nicely in the picture. 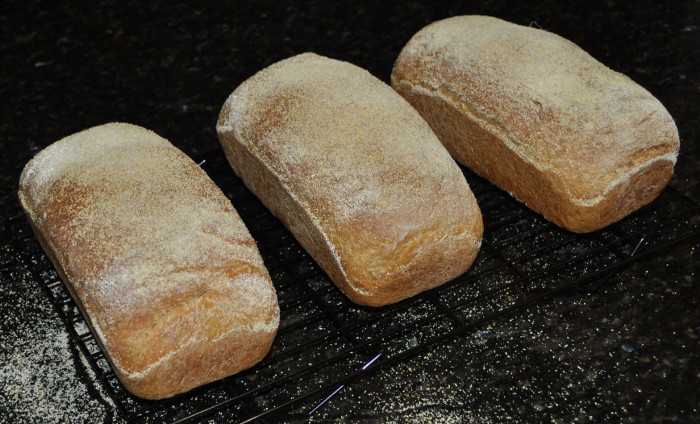 Here are the three loaves cooling on a rack. The cornmeal is extremely noticeable where it has fallen off the bread and ended up on the counter under the rack.