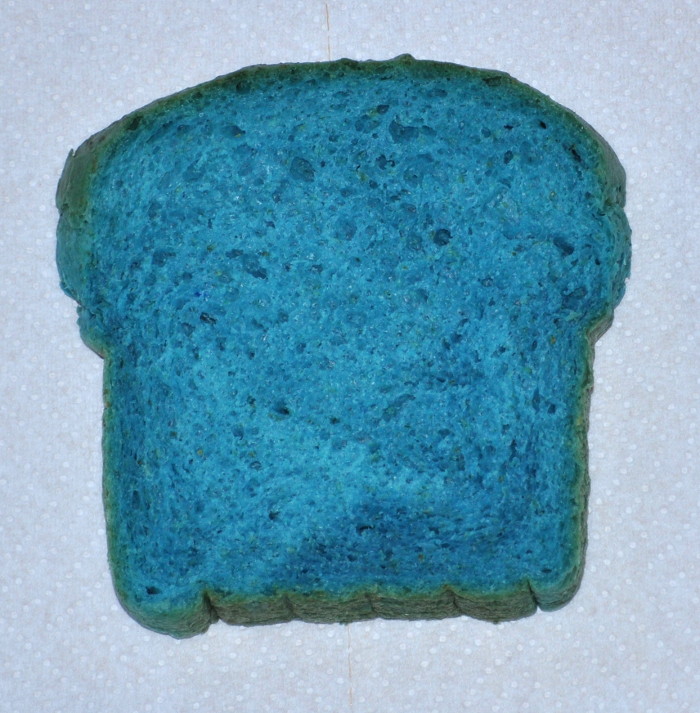 Other than the addition of the blue color this is the same recipe that has been used in several earlier posts, including the purple bread mentioned above. 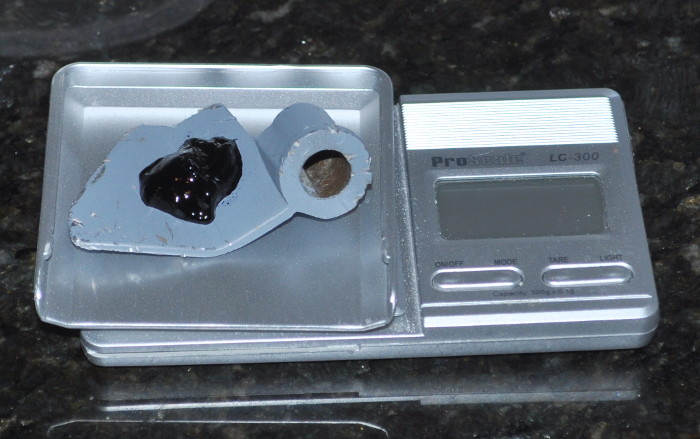 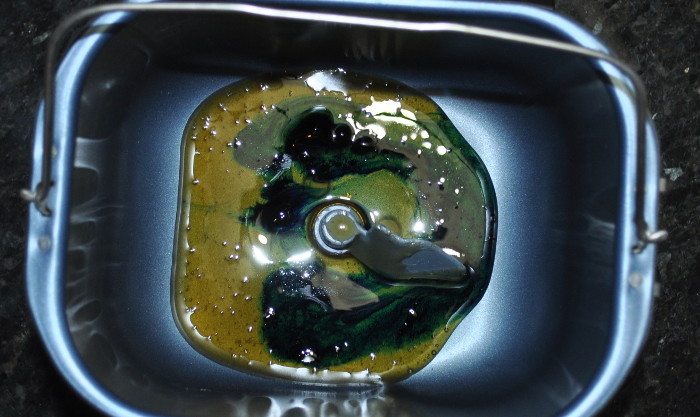 I wasn’t quite sure how measuring 2 grams of the Icing Color was going to work. It’s not solid, and it’s not really a liquid that would all pour out of a container it was weighed in. I decided that the way I would measure it was to use the paddle from the bread as the container to measure it in. It worked well, see the left picture above. 2.0 grams of Royal Blue Icing Color are resting on the side of the paddle and there is room to pick it up without touching the color.

The picture to the right above shows the pan of the bread machine with the paddle in place and the honey added. To show the color the paddle was given a couple of partial turns, spreading the color out some so it shows.

Mixing the Color In 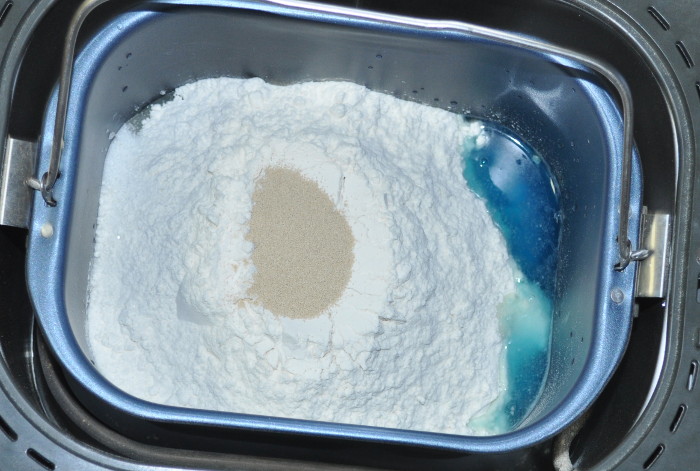 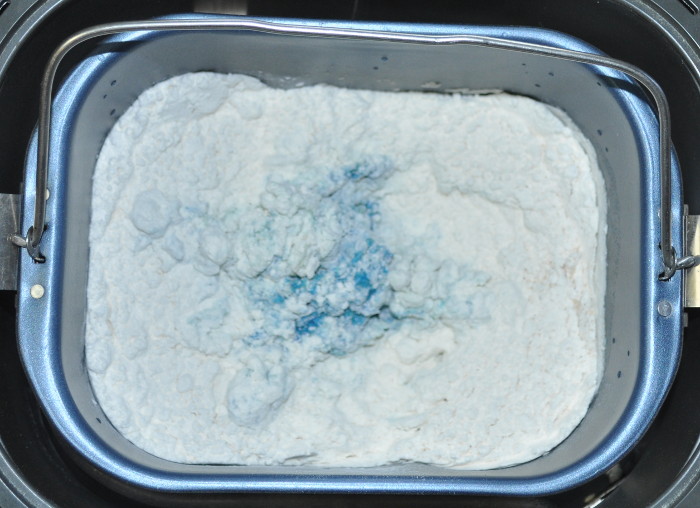 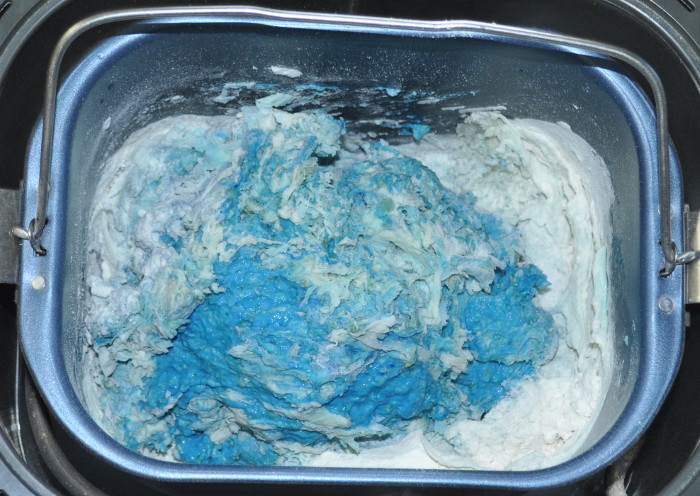 The three photos above show the ingredients in the bread machine as mixing begins. The left photo shows all the ingredients in place, ready to start the machine. The yeast is on top of the flour, and to the right some blue color is apparent where it mixed into the water that has seeped above the dry ingredients. After 40 or 50 seconds the blue began to show above the paddle, as shown in the center photo. The right photo is after about 2 1/2 minutes and the blue color is beginning to take over. 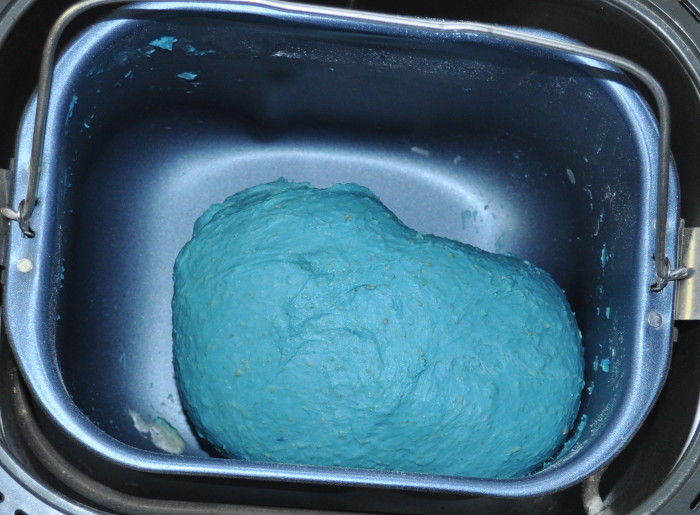 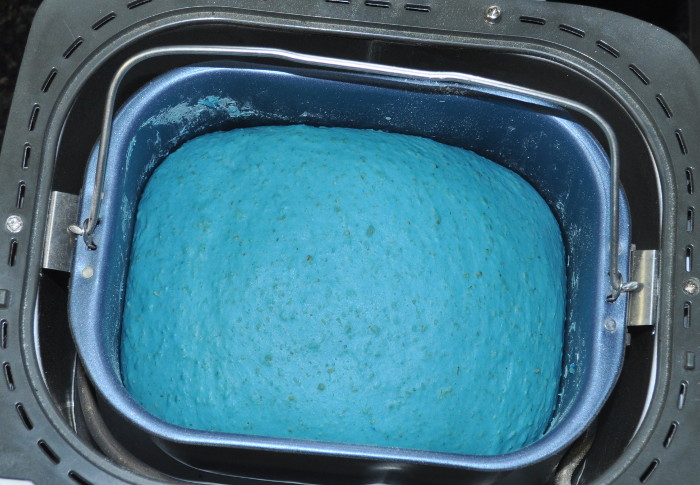 After about nine minuters of mixing the dough appears to be evenly blue, as shown in the left photo above. This is getting close to the end of the mixing before the machine starts the rising portions of the dough cycle, so I will leave the cover closed to keep the warmth in until the dough cycle is complete after 90 minutes. The right picture above shows the dough at the completion of the dough cycle. The pan is not full, but if the full normal baking cycle had been selected it might have overflowed the pan, creating a big mess. 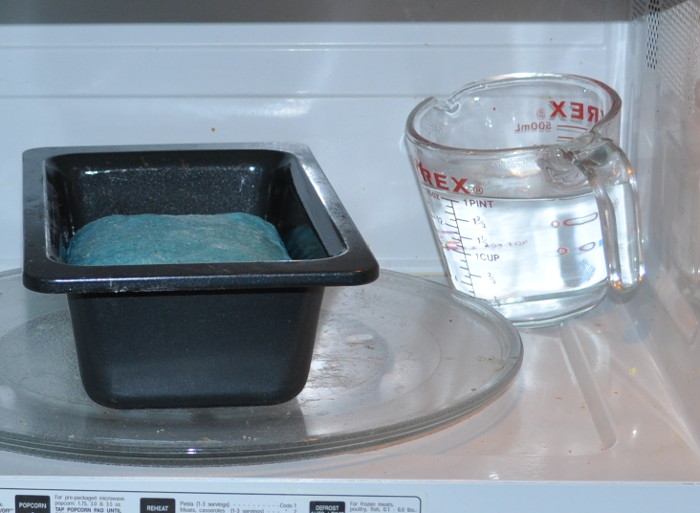 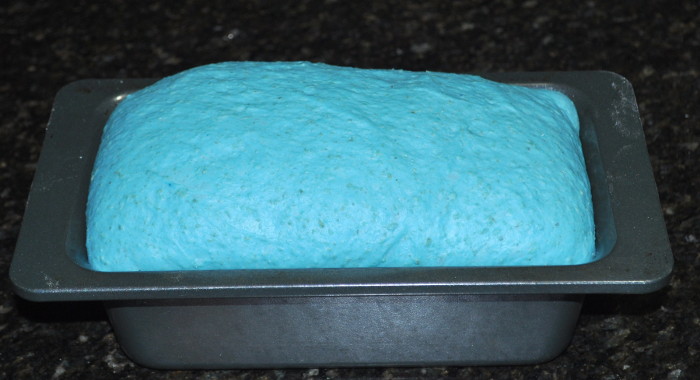 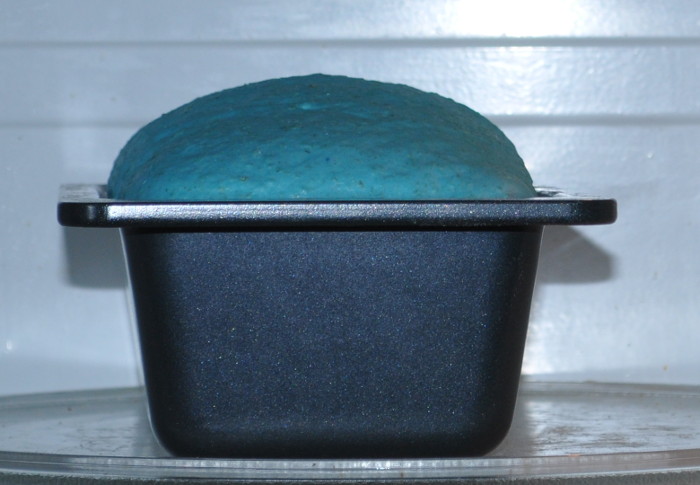 After proofing the dough had risen enough that it was above the rim of the pan. The photo on the left shows that the loaf is uneven, slightly higher on the left than on the right. This matches the preproof photo, where the slight misforming of the was noticable. The right photo shows how far above the rim the dough has risen. 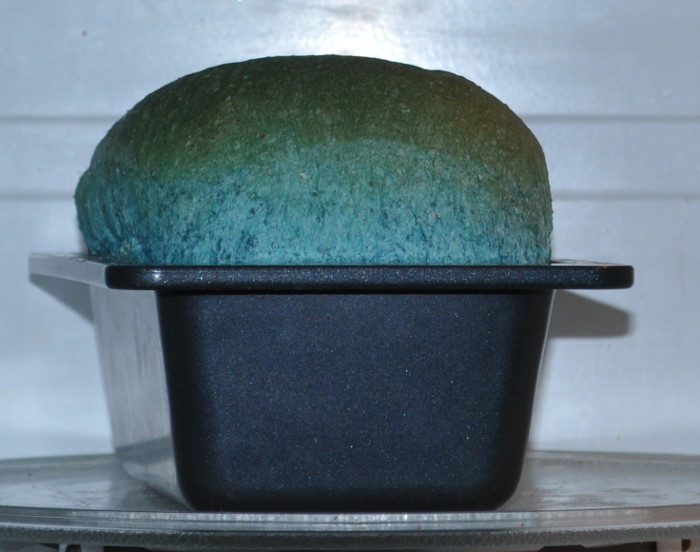 The baked loaf was put back into the microwave so that the oven spring could be seen by comparing the bread to the horizontal lines at the back of the chamber for the proofed loaf and the baked loaf. This oatmeal bread usually has a noticable oven spring. 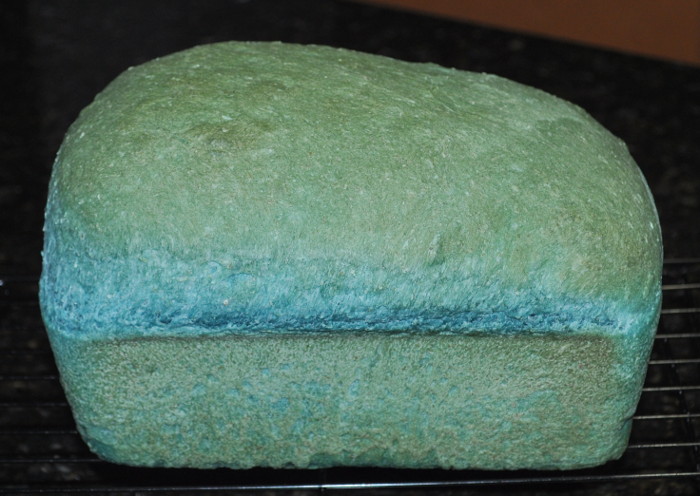 Here is the baked loaf cooling on a rack, letting the moisture escape all around the loaf. If it cools completely in the pan the bottom can get a bit soggy from the water that would have evaporated but has nowhere to go. This loaf weighed 967 grams coming out of the oven and 941 grams after it had cooled, almost an ounce of water evaporating while it cooled.

The loaf is uneven, as shown in earlier photos. I knew it was not perfectly even after I put it in the pan, but it didn’t seem that far off. It’s more obvious in the baked loaf. I’m getting better at loaf forming, but still have plenty of room to improve. 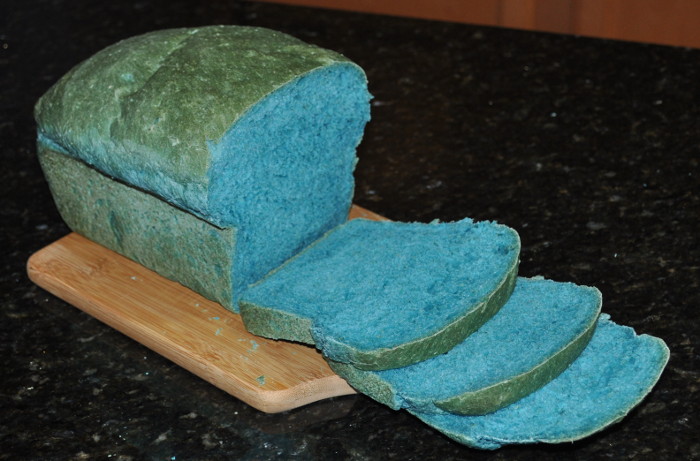 The sliced loaf is definitely blue, but on the outside it appears greenish. This is because of the browning that takes place when the bread is baked. The crust is a sort of golden brown from the carmel color of the sugars. The golden brown mixes with the blue and the result is a greenish tint to the crust rather than the pure blue of the crumb. This is the same sort of thing that caused my mother to have trouble making blue frosting when I was a kid. She used butter, 10x sugar, and milk to make a very nice frosting, but the yellow butter turned it to green if she tried to make blue. Whatever color it came out it tasted really good.