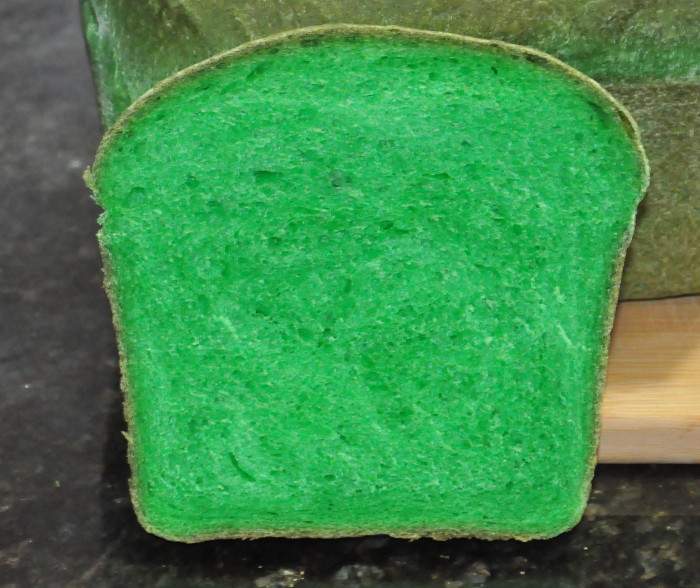 These ingredients add up to 2005 grams of dough (about 4 pounds 6 ounces.) That’s enough dough to make two 9 by 5 inch loaves. You can cut all the numbers in half to make a single loaf. You can also substitute butter or shortening for the oil in the recipe. I like the olive oil because it’s good for you and it’s easy to measure since it’s a liquid so you just pour what you need out of the bottle.

I weighed and mixed the flour, sugar, powdered milk, and yeast. Then added the dry mix to the water, salt, and oil that were all ready in the mixer’s bowl. The salt was dissolved in the water so that it wouldn’t be concentrated when it contacted the yeast. With the ingredients in the bowl the dough whisk was used to get things mixed up enough so that small lumps of dough could be used to weigh the icing color.

The icing color is very strong. Based on the results from the Blue Bread in a previous post I used 0.2% color in the bread. 4 grams doesn’t sound like much, but with 2 grams on the small wad of dough on the scale I decided that I needed to measure the four grams in two pieces. If it ran off the dough onto the pan of the scale it would get messy fast and could mean that the amount of color going into the dough was not what I thought it was. 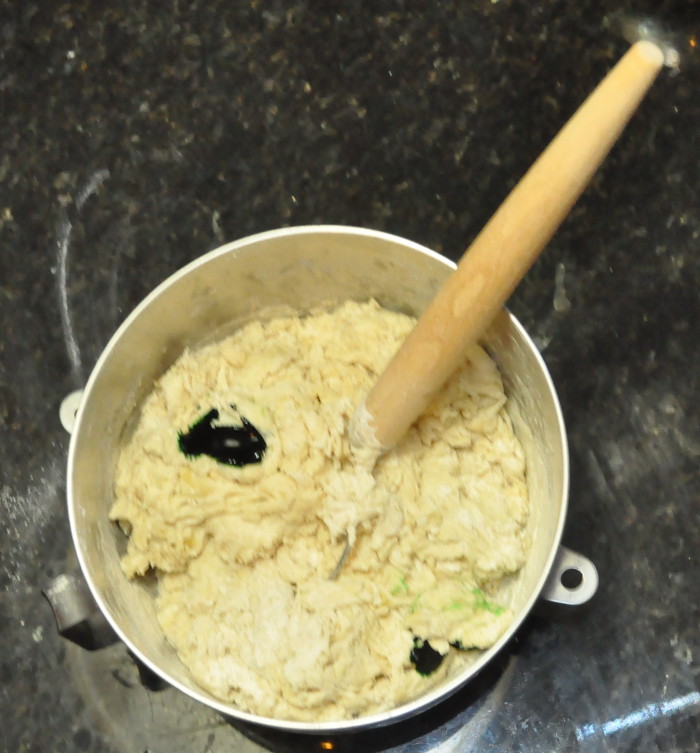 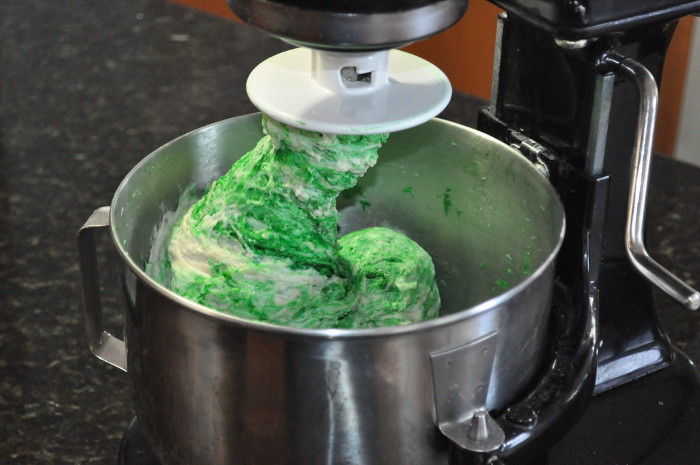 The left photo shows the two measures of icing color on the dough in the bowl of the mixer. The dough whisk is still in the dough. The flour is almost completely hydrated, but the dough hasn’t yet formed up into a ball. At this point the dough whisk can come out and be cleaned. It will clean fairly easily at this point in running water. If you wait and do it later when the bits of dough on it have dried it’s like trying to get concrete off it. I learned the hard way.

With the dough whisk out I moved the bowl onto the mixer and set up the dough hook. Without the dough hook I could have started kneading by hand at this point, but would have dyed my hands green most likely. The picture on the right shows the dough about a minute after the dough ball had formed up. The color is spreading through the dough but is far from evenly distributed. 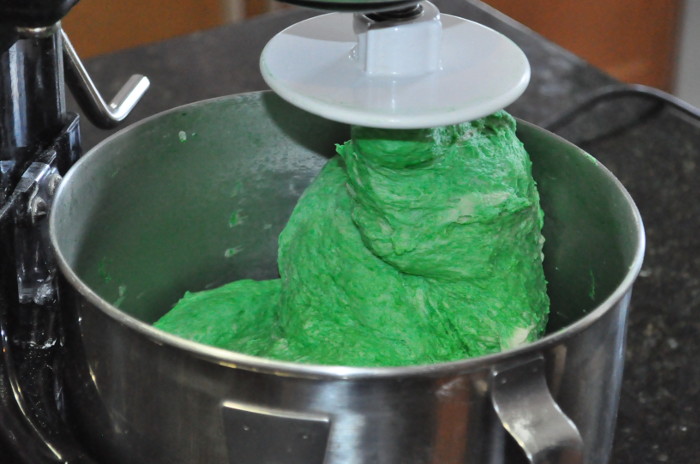 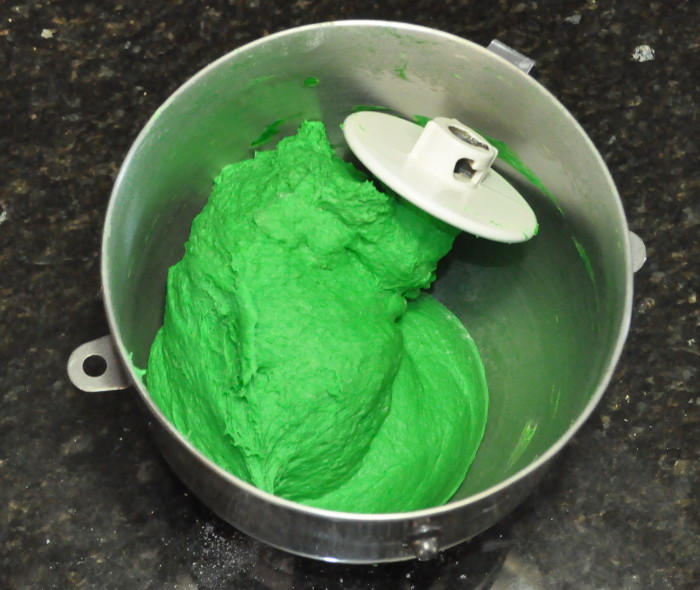 The left photo was taken about 2 minutes after the dough ball formed. The color is nearly uniform, but there are still some white streaks. After another 3 minutes the color is pretty uniform, the dough is starting to climb the hook and the mixer is straining. 1800 grams of dough seems to be the limit for the mixer, so I took the dough out of the mixer and kneaded by hand for another 6 or 7 minutes. The dough was a uniform bright green when I took it off the mixer, but not ready for the bulk ferment. 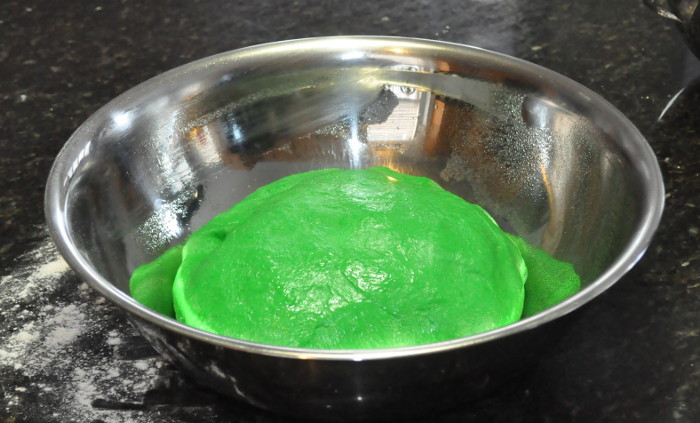 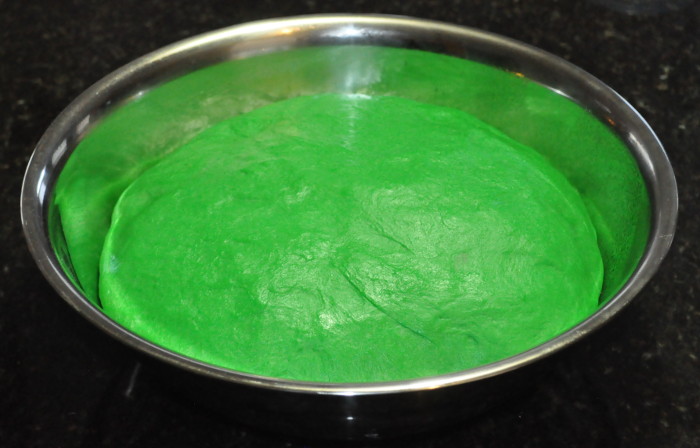 When I made batches of bread of 1800 grams or more the bowls I had were barely large enough, so I investigated larger bowls. My biggest glass bowl was 4 quarts. It was nice but heavy and I didn’t want to think about what would happen if I dropped it. I started looking for metal bowls. I found a good looking Vollrath 8 quart bowl on Amazon, but it was expensive. I searched for the bowl and ended up buying two from webstaurantstore.com. The price was excellent and although the shipping added to the cost it was in line with actual costs and the second bowl added only 88 cents to my shipping cost. They shipped promptly and I am pleased with both the bowls and the service. The kneaded dough is shown in one of these bowls in the left photo. The right photo shows the dough 50 minutes later, nicely doubled. 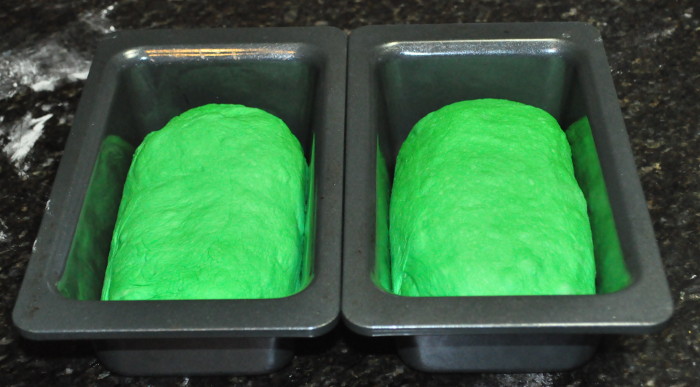 Here are the two loaves in their pans before proofing. Nice and bright green. 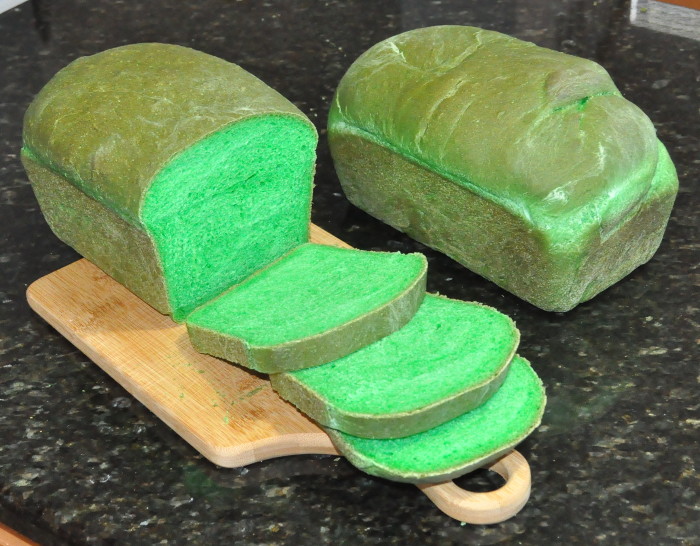 Here are the two loaves the next morning. One had been sliced to show the bright kelly green crumb. The other shows that when the loaf is shaped and placed in the pan any irregularity will be magnified on the proofed and baked loaf. I’m doing a lot better at forming loaves, but I am far from perfect as the big bump on the end of this loaf shows.

From this picture of the sliced loaf the effect of browning on the color of the loaf is very obvious. The outside of the loaf is sort of green as a result of the browning while the unbrowned interior shows the bright green expected with green dye and white bread. The previous postings with dyed bread have all been with dyed Oatmeal Bread. A comparison of the results with Oatmeal and White Bread with the same dye concentrations would be interesting.