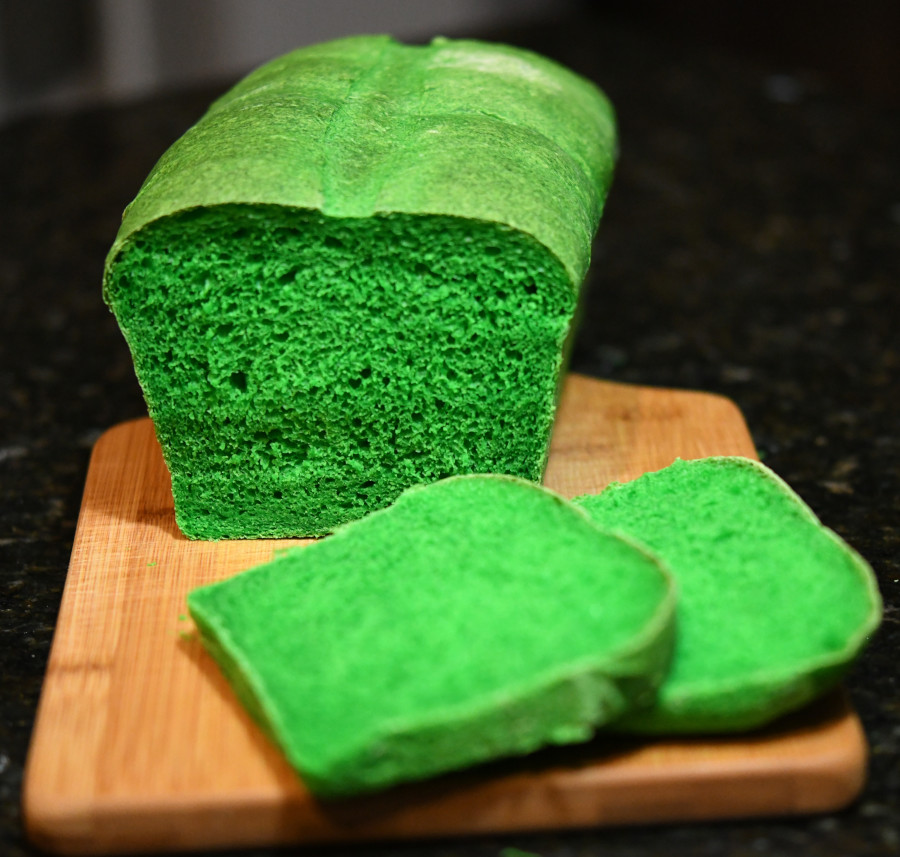 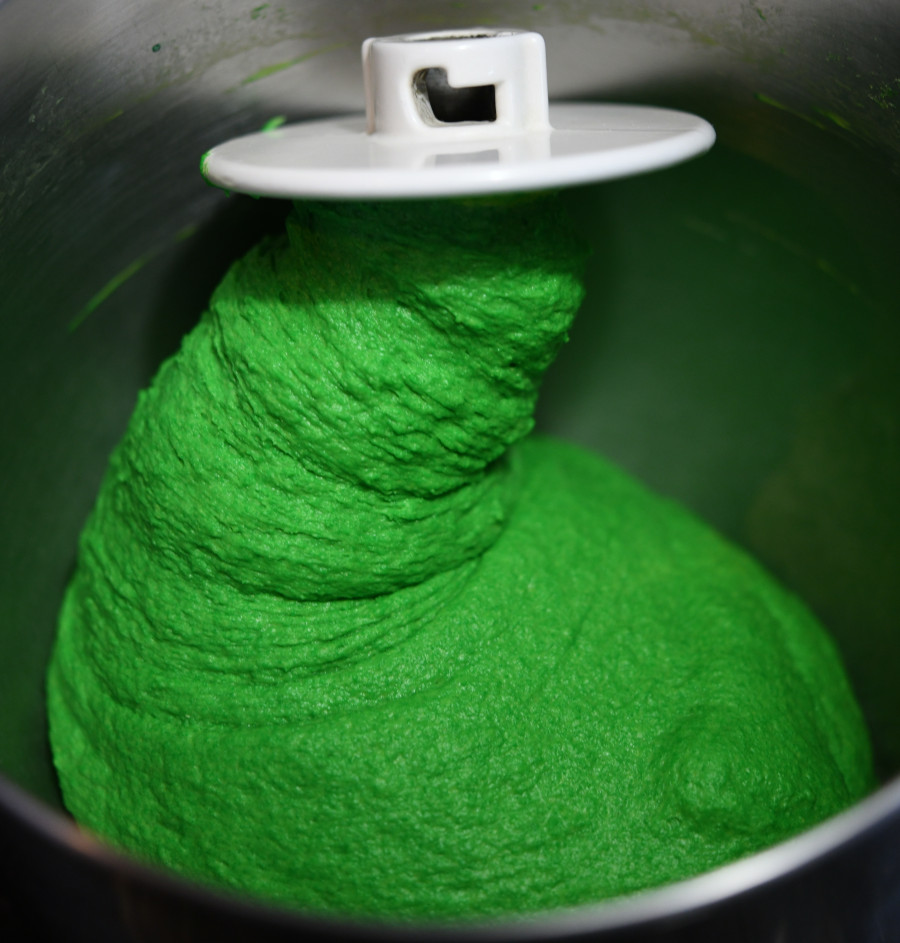 This picture shows the dough after it has been kneaded for 7 minutes on the dough hook (timer starts when the dough has formed a ball.) It is nicely green.

I have a 5 quart Kitchen Aid stand mixer with a “J” dough hook. Mixing much less than 1400 grams of bread dough is not really enough for me to feel confident that the mixer is doing a good job kneading – there isn’t enough in the mixing bowl for the hook to work well. This recipe makes 1450 grams (for other batch sizes see ingredient table below.) 1450 grams works out well since 700 plus a little is a good fit with the 8.4 by 4.4 loaf pans I usually use.

This recipe is one I have made many times and yields a nice loaf of white bread when it’s not getting the bright color treatment. The ingredients are listed for the green version and for the natural color version. The liquid food coloring I used and where I purchased it are below.

For accuracy in measuring I use two scales, a kitchen scale that measures up to 18 kilograms by grams, and one that measures up to 300 grams by 0.1 grams. That way I can get accurate amounts of all my ingredients.
Start by getting the wieght of your mixing bowl, then use the tare function of the scale to get a 0 gram weight and add the water. Next, use the smaller scale to measure the food coloring and mix it into the water. The olive oil I measure with the large scale as it is hard to get it all out of a separate container into the mix if you measure it on the small scale and with care you can get it measured within a gram on the large scale. Next get a tare again on the large scale with the water, coloring, and oil in it before adding the bread flour.

Smooth out the top of the flour before adding the Sugar and the Salt. Sprinkle them over the top of the flour and gently mix them in so that the yeast won’t be added next to a concentration of salt. Use the small scale to weigh the sugar, salt, and instant yeast. The last ingredient to be added is the yeast. Sprinkle it evenly over the flour and gently mix it into the dry top layer of flour so it ends up evenly mixed into the entire batch of bread.

You should have a dry layer of mostly flour above the liquid ingredients. If you put it into the mixer at this point it will spray flour all over unless your mixer runs at a much slower speed than mine. I use a dough whisk to get the dry ingredients mostly wetted before putting the bowl into the mixer and starting the dough hook. I run the dough hook for 7 minutes after the ball of dough has formed.

After mixing/kneading with the mixer dough hook the dough needs let the yeast work in the bulk ferment. The pictures below show the dough as placed into a plastic container for the bulk ferment on the left. The container is covered to keep the dough from drying too much. The photo on the right shows the dough about an hour and twenty minutes later after growing to about two and a half times its original size. 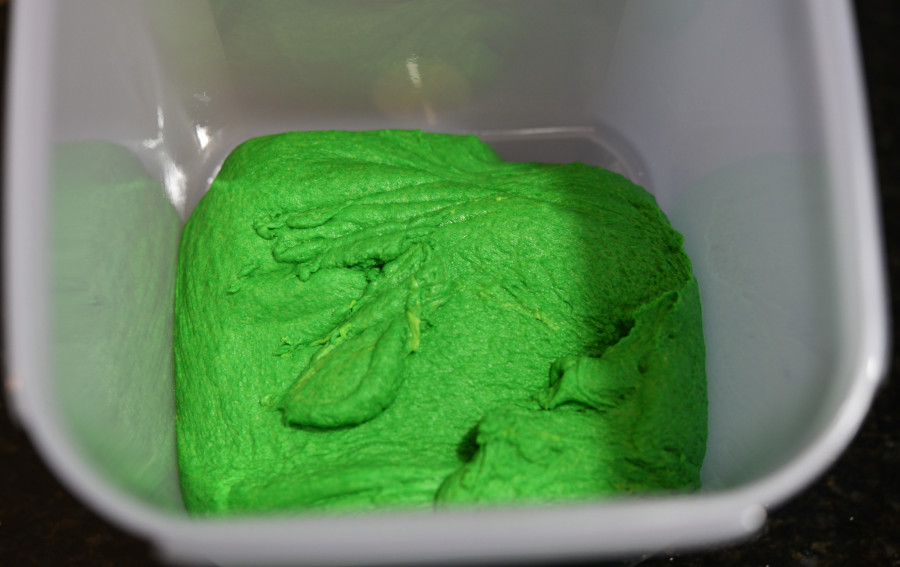 After the dough has risen, punch it down and form two equal loaves. Put the formed loaves into pans lightly coated with release spray. Proof the loaves until they have doubled in size. The two pictures below show the loaves in the pans before proofing. I usually proof in my microwave, after boiling some water in in it. The hot water stays in the microwave with the bread to add humidity and warmth.

The two photos below show the bread before and after proofing. In the photo on right the dough has been scored, although the score barely show. Scoring allows the loaf to expand from the oven spring without tearing the crust. 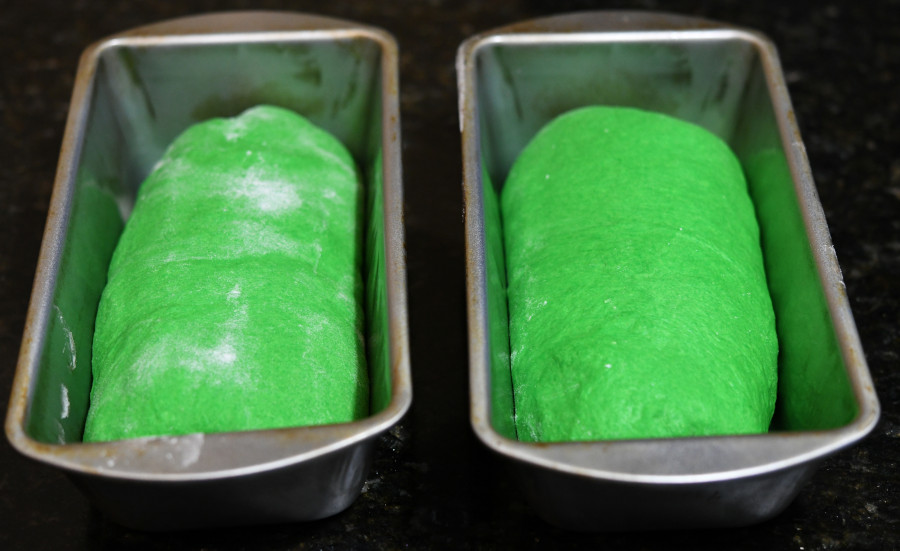 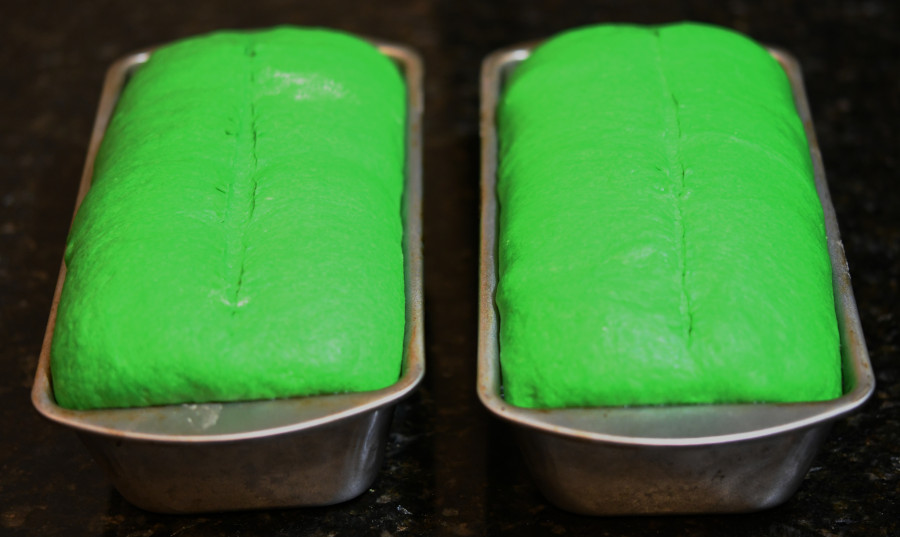 Bake at 350 F for 35 minutes. This should result in the internal temperature of the loaf reaching at least 185 F and a fully baked loaf. Since you want an oven that is preheated to 350 F before the bread goes in, I suggest always starting the oven when you begin proofing. This assures that when the bread is ready the oven will be too. Otherwise it’s too easy to realize the bread is ready to go in the oven and the oven is cold.

The bread expands from the heat of the oven, the “oven spring”, opening up the score. The score in the baked loaves are quite visible and readily show in the photo below. 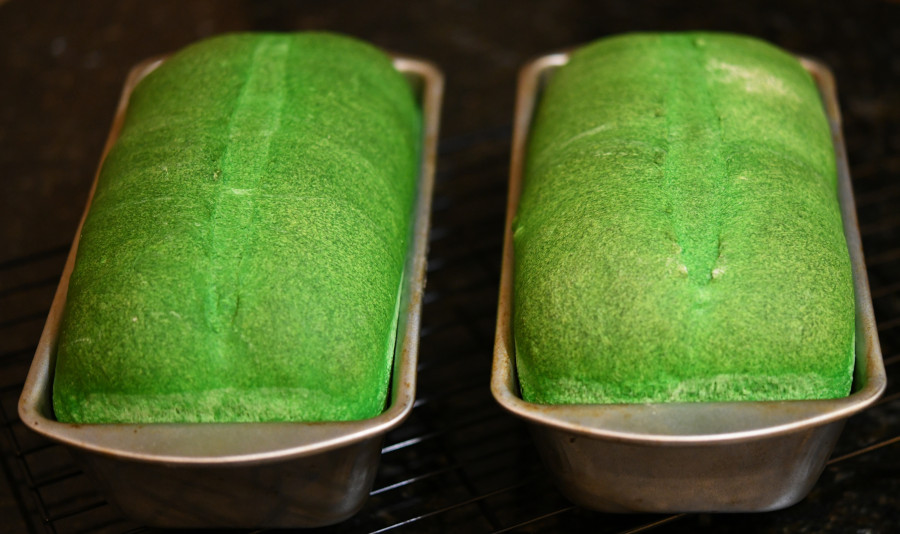 Here is a picture of the gallon bottle of green food coloring I bought from webstaurantstore.com. The price was very reasonable, and so was the shipping, even though it was more than double the cost of the coloring itself. It was heavy and the bottle came securely sealed in a bag inside the package to prevent any leakage from the bottle from escaping and coloring random items kelly green before I received it.

Since the measurements are all in grams it is easy to change the recipe to get a different batch size. Multiply all of the ingredients by the same number and you have the new batch size. If you want naturally colored white bread, just replace the coloring in the ingredient list with plain water. That will keep the hydration the same and omit the coloring.